The Huffington Post has launched its Canadian edition, the latest U.S. digital media company to use Canada as an international testing ground.

The news aggregation company Huffington Post Canada took the wraps off a new homepage dedicated to Canadian news and politics, with contributions from prominent Canadians such as David Suzuki and Elizabeth May.

Plans for the launch emerged in April, when the publication began hiring in Toronto. It's the first step in a series of new editions planned for international markets. The HuffPo, as it is often called, will launch a U.K. version on July 7 and has hired 130 journalists there in the past few months. Founder Arianna Huffington will travel to Brazil at the beginning of September to finalize plans for a Brazilian edition as well.

"I have been wanting to launch in Canada for a while," Ms. Huffington said in an interview on Thursday.

In February, AOL bought The Huffington Post in a $315-million (U.S.) deal, and installed Ms. Huffington as the president and editor-in-chief of the Huffington Post Media Group division. That merger gave the site the capital and an established base of Canadian staff to expand here.

The decision to come to Canada was fuelled too by the large Canadian audience that already existed for the U.S. edition, which in the past year has attracted on average 1.3 million Canadian unique visitors, according to Comscore, which measures Web traffic.

"We had a constituency that was interested in more, and now being able to superserve it with Canadian stories and Canadian bloggers is a really exciting prospect," Ms. Huffington said.

The Canadian expansion comes just one day after Postmedia Network Canada Corp. announced that it is testing a metered pay model for two of its newspapers' websites, with plans to charge for online content across Canada in the future. Ms. Huffington, whose site is known for drawing content from other sources and linking to free articles to boost traffic and sell advertising, said that such pay walls being put up by traditional news sites such as The New York Times are good for her publication.

Mary McGuire, a professor of multimedia journalism at Carleton University in Ottawa, said that pay walls could certainly change the news environment. "I don't see people paying, when there's a lot that's available for free," she said. "But journalism done by paid reporters, if that becomes hidden by pay walls, that also changes the model for an aggregation site like Huffington Post."

The site has continued its past practice of recruiting big-name contributors, including politicians, activists, celebrities and business leaders. On Thursday it announced that Indigo Books & Music Inc. chief executive officer Heather Reisman would act as editor at large for Canada. (Writer and film director Nora Ephron holds the post in the U.S.)

The relationship could also mean promotional partnerships with Indigo on the site, Ms. Huffington said. Bank of Nova Scotia came on board as advertising partner for the Canadian launch.

Currently the AOL Canada team and the Huffington Post Canada team have merged, with about 24 staff running the sites. Editors were brought in from New York to flesh out the Canadian team and support the launch. The publication will hire two or three more people for the Canadian team, and evaluate other staffing needs as operations continue.

The launch was not without glitches. A story about National Bank of Canada earnings featured a photograph of the Bank of Canada headquarters. In the early afternoon, the largest headline on the site read "Cyber Fail" and, ironically, showed an error message rather than linking to a story.

The Huffington Post has been criticized for not paying its bloggers - Ms. Huffington is currently being sued by a group of bloggers in the U.S. who argue they helped to build the site's value, contributing to the AOL acquisition - and for taking content from other news organizations, rather than paying for the resources required to produce them independently.

"We are part of a linked economy," Ms. Huffington said on Thursday. "We aggregate, we don't borrow. We link back to the original creator of the content, which is something people love. We get dozens of requests every day to link to peoples' stories. … We don't see it as either/or. We don't see ourselves as supplanting much of the great media you already have. That's not our goal."

The Huffington Post will have to fight against ingrained Canadian media habits, said Kaan Yigit, president of Solutions Research Group in Toronto. In a survey conducted late last year, the research firm found that seven out of 10 Canadians turn to the online versions of the traditional media sources they typically use when seeking news online. A subscriber to a printed newspaper, for example, is likely to go to that paper's website.

"I can think easily of 10 sources ahead of something like Huffington Post that people could turn to that would be more authoritative, established, and part of their habit," Mr. Yigit said. "But then, the marginal cost of Canadianizing The Huffington Post is quite small. By localizing it, they are making a bet that they could charge a premium for Canadian advertising."

The Canadian site will take the same approach as The Huffington Post in the U.S., said AOL Canada's head of content, Brad Cressman. That means aggregating content from other sources, but also fostering a vibrant blogging community and comments section - something that has characterized the U.S. site - and bringing a lively voice to news stories. He cites recent headlines such as "IMF OMG" (on a story about Dominique Strauss-Kahn) and "Poke the Pope" (on Pope Benedict's decision to join Facebook) as prime examples of the irreverent tone that will differentiate the publication in Canada.

It will also seek to take advantage of a growing digital advertising market in Canada. Advertisers spent an estimated $1.7-billion for Internet ads in Canada in 2010, according to a report by PricewaterhouseCoopers. That's expected to grow to more than $1.9-billion this year. The Huffington Post is currently working on plans to offer advertisers the opportunity to provide sponsored content on the site as well.

Compared to the U.S., the Canadian media landscape has fewer digital-only publications, Ms. Huffington said. In the U.S., online magazines such as Salon Salon and the Daily Beast compete for a similar Web readership, while in Canada The Huffington Post aims to market itself as a digital leader. 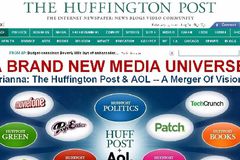 Do unpaid bloggers deserve a piece of the HuffPo pie?
April 12, 2011 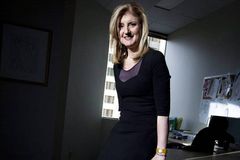 How Arianna Huffington became Miss America
November 26, 2010
Is Arianna Huffington the great role model of our times?
February 10, 2011
Follow us on Twitter @globebusiness Opens in a new window
Report an error Editorial code of conduct