Giovanni Bisignani is cheering for Air Canada and jeering Ottawa.

In the battle of global air hubs, Mr. Bisignani said Toronto, Vancouver and Montreal are slipping in competitiveness because they pay high federal taxes in the form of airport rent, which in turn shows up in hefty landing fees charged to airlines.

Toronto's Pearson International Airport, which is home to Air Canada's largest hub, is especially well situated to attract travellers from mid-sized U.S. cities who must fly to larger terminals to catch connecting flights to overseas destinations. Pearson's geographical advantage of being close to key U.S. markets, however, is being dampened by Ottawa's rental charges, Mr. Bisignani says.

Since Ottawa transferred responsibility for operating Canada's largest airport to the Greater Toronto Airports Authority in 1996, the GTAA has paid $1.82-billion in rent to the federal government - far exceeding Pearson's book value of $263-million at the time of the transfer.

"In Canada, you have this Crown rent that is killing the opportunity to have Toronto take full advantage. You are missing an opportunity to expand and to become a real hub for the United States," Mr. Bisignani said in an interview from his Geneva office at IATA, which represents the world's global carriers.

"The Canadian government doesn't understand that cashing in on Crown rent is a short-term vision."

Pearson holds the dubious distinction as having the world's most expensive landing fees charged to airlines, but Ottawa has said its collection of rental payments from major airports form the foundation of the country's aviation policy - levying "user-pay" fees where possible instead of relying on U.S.-style government subsidies for the aviation sector.

But high taxes and fees are also turning off many foreign tourists from visiting Canada, industry analysts say. In tourism popularity, Canada has fallen out of favour, tumbling to 15th spot in 2009 as a destination for international tourists, down from an eighth-place ranking in 2002.

The airport rental payments system in Canada contrasts sharply with the approach of the U.S. government, which views airports as sparkplugs for regional development and tourism, believing that the broader benefits of economic stimulus are worth the price of subsidies for U.S. air terminals, analysts say.

For flights to Asia, however, Air Canada is optimistic about luring travellers from secondary U.S. airports to connect through Toronto, despite expensive landing fees at Pearson.

"Flight times from Toronto to Tokyo or Beijing, for example, are shorter or the same as from the major U.S. eastern hubs such as New York and Chicago," Mr. Rovinescu said in a recent speech.

Air Canada says it is competing fairly against American carriers for U.S. traffic. Air Canada, which has complained about Emirates airline trying to muscle in on global connecting passengers, argues that the Dubai-based carrier enjoys unfair advantages instead of agreeing to a level playing field.

Air Canada has made inroads in luring travellers from U.S. markets such as Cleveland, Pittsburgh, Cincinnati, Philadelphia, Boston, and Baltimore, Md., and Hartford, Conn., to connect through Toronto. Mr. Rovinescu believes the carrier would do even better if taxes, and therefore final ticket prices, were lower.

Mr. Bisignani said Air Canada, which has recovered from a cash crunch in 2009, needs help from Ottawa to "take advantage of the neighbourhood," notably Pearson's strategic location in North America. 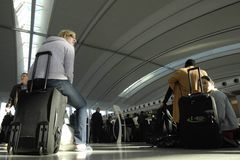