The annual World Economic Forum runs this week from Wednesday to Sunday in Davos, Switzerland. Canadian technology expert and author Don Tapscott will be writing columns from the event for ReportOnBusiness.com all week. Here is his introductory piece.

As a Fellow of the World Economic Forum, I've been attending the annual meeting in Davos, Switzerland, for a dozen years. But I've never anticipated the event more than this year. The event's theme is "Improve the state of the world: Rethink, redesign and rebuild" - music to my ears.

Evidence is mounting that the world and many of its institutions are stalled and need reinvention - from the financial system, the old model of government, the media, our energy and transportation systems, our cities, universities, science and even democracy. Transforming these is a daunting challenge that will require the efforts of many parts of society.

"Global multi-stakeholder co-operation lies at the heart of the forum's mission to improve the state of the world," says Klaus Schwab, a German economist and founder of the forum. "We have to rethink our values - we are living together in a global society with many different cultures. We have to redesign our processes - how do we deal with the issues and challenges on the global agenda. And finally, we have to rebuild our institutions."

Most significantly, our systems for global problem solving are broken. Says Prof. Schwab: "We have to look at the forum meeting in the context of what's happening in the world … and we see that, clearly, the present system of global co-operation is not working sufficiently. So we want to look at all issues on the global agenda in a systemic, integrated and strategic way, and we want to address in particular the issue of global co-operation."

The Davos event is often misrepresented as a meeting of the business and political elite. This year's 2,500 attendees will again include a broad cross-section of society, with representatives from business, government, the media, science, religion, the arts and civil society.

Nearly half the participants come from outside business, including more than 30 heads of state or government, at least double that number of government ministers, more than 100 heads or top officials from international organizations and non-governmental organizations, more than 200 leading academics, and more than 200 media leaders. Prime Minister Stephen Harper is scheduled to speak Thursday. More than 30 social entrepreneurs will attend, and almost as many labour leaders as central bankers will be participating, with more than a dozen representatives from each category.

Like me, many will have participated in the forum's Global Redesign Initiative, which began after last year's gathering and aims to address many of the challenges confronting our world today. Over the past year we have been developing recommendations to help adapt and improve the structures and systems of international co-operation.

I appreciate that such an initiative sounds grandiose. Is it delusionary for the forum to try to pull off such an ambitious undertaking? My response: If not the World Economic Forum, then who?

To achieve new models for global problem-solving we have to overcome a major obstacle: The world is organized around nation states based on national economies and that is unlikely to change in the foreseeable future.

The idea of national sovereignty dates back hundreds of years with the 1648 Treaty of Westphalia. After the Second World War there were many bold initiatives to create better systems of global co-operation, including BrettonWoods, the United Nations, the General Agreement on Tariffs and Trade (GAAT), the Geneva Conventions, the Universal Declaration of Human Rights, the World Trade Organization, the Group of 8 and now the G20.

But, as evidenced by last month's UN climate change conference fiasco in Copenhagen, the existing structures are increasingly inept at fixing what ails the world. Contrast, for example, the Copenhagen failure with the growing world-wide networks and movement of millions of people motivated to turn back global warming.

The solution to global problems is not to create some global government. Rather, there are new possibilities in the digital age to create networks involving business, government and civil society. The forum is a case in point - a global collaboration that is actually making the real progress in solving global problems on many fronts. I, for one, am in.

Contributing to the brainpower of the Global Redesign Initiative is the forum's Network of Global Agenda Councils - more than 1,000 experts representing more than 50 thematic areas of international co-operation (e.g. water security, pandemics, migration). Approximately 3,000 participants drawn from the forum's industry, governmental, civil society, academic and media communities provided input. They were selected as the most innovative and relevant thinkers to capture the best knowledge on each key issue and integrate it into global collaboration and decision-making processes.

I have spoken to many other members of the councils over the past year. Most of us were impressed by the high-calibre and sincerity of the discussions. Our job at Davos will be to not only challenge prevailing assumptions, monitor trends, map interrelationships and address knowledge gaps, but to propose solutions, devise strategies and evaluate the effectiveness of actions.

I'll be blogging and tweeting throughout to let you know how it's going. Stay tuned.

Don Tapscott is the author of 13 books, chairman of nGenera Insight think tank, and an adjunct professor at the University of Toronto's Rotman School of Management. Twitter: @dtapscott 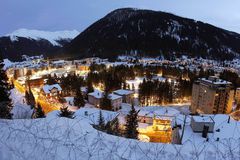