The corporate party is back on at the Stampede.

Canada's oil and gas sector is in the midst of a sharp rebound, and energy companies are again spending on a slew of festivities at Calgary's biggest annual attraction.

The 10-day rodeo and midway kicks off Friday with a parade in downtown Calgary. Behind the scenes is a schmoozefest that takes place at invite-only corporate parties – usually boozy events used to reward loyal clients and make new contacts in an informal setting.

The pace and scale of corporate parties was toned down in the wake of the economic slowdown of 2008 and 2009 – and some companies have continued with the trend of donating to charity rather than a Stampede party costing tens of thousands of dollars. The focus of many of last year's parties was fundraising following southern Alberta's massive floods.

But now there are many signs corporate party spending is again being ramped up. For instance, Paul Vickers, whose Penny Lane Entertainment Group owns Cowboys nightclub along with other well-known Calgary restaurants, plus a casino, said corporate party bookings are up 25 per cent compared to last year.

"It's always a reflection of where the industry is," said recruiter Catherine Brownlee, who has worked in the oil and gas industry for 30 years. "When we're in the downturns, sometimes they cancel [the parties] all together or downscale them in a big way. But this year, it's the opposite of all that.

"I don't know how many hundreds of invites I've received. I could be busy all day and all night if I wanted to be. It's crazy."

Oil and gas insiders are also celebrating the return of oilman and financier Jim Kinnear's party at his large Mount Royal house. The founder of Pengrowth Energy Trust has held off on the coveted, invite-only event since 2012, but Chelsea Logan of Kinnear Financial Ltd. said people were so disappointed the long-time event had been cancelled, Mr. Kinnear decided to bring it back. This year the party will feature performers including the Nitty Gritty Dirt Band and Ian Tyson.

Another premier corporate event is the Big Guns Stampede Breakfast, held on Tuesday morning – a key mid-Stampede party slot when the workers in Calgary's downtown office towers still have the energy to drink vodka and orange juice at 7 a.m.

Duncan McPhedran, president and chief financial officer for Big Guns Energy Services Inc. – a private firm that specializes in services for oil sands and unconventional oil and gas – said everyone from administrative assistants to chief executives are invited to their early morning bash. In a tongue-in-cheek nod to keeping up the appearance of work, Mr. McPhedran said some attendees place mannequins in their office chairs during the hours of the Big Guns event.

"It's a true oil patch breakfast," he said.

Although Baileys Irish Cream and coffee has long been a standard drink at early morning corporate Stampede parties, the Alberta Gaming and Liquor Commission has never before allowed bars and restaurants open to the public to begin early liquor service during the rodeo and exhibition.

But in an Alberta first, the province's liquor commission announced Thursday it will allow Calgary bars and restaurants to serve alcohol to belt buckle-clad patrons early in the morning for the duration of the Stampede – adding fuel to the party buzz.

Buoyed by the relative calm of an experiment that saw bars open at 5 a.m. for the Canadian men's hockey team gold medal game during the February Olympics, the commission said Calgary bars and restaurants will be allowed to serve liquor beginning at 7 a.m. on Friday, for the opening parade day, and 8 a.m. every day after that until the end of Stampede on July 13th.

The commission said looking at more flexible liquor service hours is part of its mandate to improve liquor rules and policies. Under the normal rules, bars and restaurants in Alberta are allowed to serve liquor between 10 a.m. and 2 a.m.

Bill Robinson, president and chief executive of the commission and a former police officer, said the time of day that people drink doesn't necessarily ramp up the potential for bad behaviour. The commission will evaluate the Stampede pilot project in follow-up discussions with licensees and police, and will also look at the public reaction. He said drinking establishments have to follow all liquor laws and police will be cracking down on drunk driving.

"Whether you drink in the morning, the afternoon or in the evening … you have do so in a responsible way," Mr. Robinson said. "This isn't a free-for-all."

For his part, Mr. Vickers said the decision won't result in huge influx of early morning liquor sales and is simply a reasonable step on the part of the commission for a "mature" Canadian society.

Progress a challenge to gay rodeo in Alberta
July 2, 2014 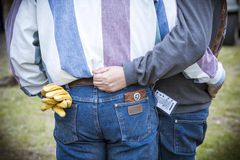 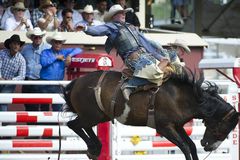 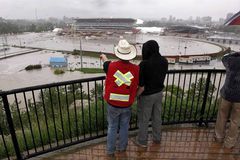 Stampede official looks back on frantic efforts to recover from the 2013 flood
July 1, 2014 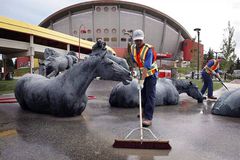