Driving along the bumpy road that connects Phnom Penh with the courtroom on its outskirts that hosts the trials of the Khmer Rouge leadership, you pass through an intersection where Kim Il-sung Boulevard stretches north and Mao Zedong Boulevard heads south.

Both streets were named after the friends and patrons of the Khmer Rouge during its brief period in power in the 1970s, a time when Mao and Kim feted Pol Pot and China sold him weapons in exchange for rice even as hundreds of thousands of Cambodians were starving to death.

That the intersection lies on the road to the Extraordinary Chambers in the Courts of Cambodia - the United Nations-backed tribunal that is seeking to bring the surviving leadership of the Khmer Rouge to justice - seems fitting. The ECCC is located among the "killing fields" outside the Cambodian capital where many of the genocidal regime's estimated 1.7 million victims are buried. Most of those who were tortured at Phnom Penh's notorious S-21 prison under Comrade Duch - the Khmer Rouge jailer whose trial heard final arguments this week - passed through the same intersection before being forced to kneel beside the open pits that would become their graves.

Of course, it wasn't just the Khmer Rouge that was annihilating large swaths of its population in the 1970s. As Pol Pot was emptying out Cambodia's cities in an effort to create an agrarian utopia, Mao's Cultural Revolution was near its bloody peak, claiming millions of lives. Kim, meanwhile, was building a network of labour camps that has swallowed hundreds of thousands of people and exists to this day under the leadership of his son, Kim Jong-il.

Which is why the ECCC deserves the word "extraordinary" in its title. For all the tribunal's flaws - and there are many - Cambodia is unique in Asia for at least beginning to try to come to terms with its blood-soaked past. Repressive regimes around the region, including the hard-line military junta in Myanmar, must be watching with some trepidation, wondering what it may eventually mean for them.

Tellingly, the tribunal is funded largely by Western countries (including Canada), plus Japan, which is by far the largest international donor to the court. Other than Thailand and South Korea, no other Asian country has contributed financially. China, which accounts for about half of all foreign direct investment in Cambodia, has given nothing to the ECCC.

Media coverage of the trial gives another hint of how the process is being viewed around the region. The final week of the trial, during which millions of Cambodians watched on live television as Comrade Duch asked for forgiveness, frequently led the news on the Singapore-based Channel NewsAsia, while Japan's Kyodo news agency had a correspondent filing updates from the court. China's official news service, Xinhua, ignored the proceedings, even though it has a correspondent stationed in Phnom Penh.

"I think it would be meaningful for us to look at [the Khmer Rouge tribunal]and have some retrospective on our own country. It wasn't this extreme or terrible in China, but we also have a tragic history," said Rachel Cai, a recent graduate of Beijing's University of Political Science and Law, who monitored parts of the trial for the Asian International Justice Initiative, a project funded by the British embassy in Phnom Penh.

But that, Ms. Cai added, seems unlikely to happen in the near future. Her country, still ruled by the same Communist Party responsible for much of its tragic history, is too busy racing ahead economically, and the recent past is too sensitive.

Sitting in the courtroom and watching as victims and lawyers confronted Comrade Duch with the horrors committed at S-21 under his command, it was indeed difficult to imagine the henchmen of Mao, Kim or Myanmar's Senior General Than Shwe ever facing similar justice. But then again, just a decade ago it seemed unlikely that the Khmer Rouge would ever be called to account for what they did to this country.

Many Cambodians have complained that the ECCC is moving too slowly; the case against Comrade Duch, whose real name is Kaing Guek Eav, is only now drawing to a close after nine months of testimony. The next dossier - which includes four top leaders, among them former president Khieu Samphan and Nuon Chea, known as the regime's "Brother Number Two" after Pol Pot - will probably take even longer, as they, unlike Comrade Duch, have refused to co-operate with the court. There have also been accusations of political interference, with the government of Hun Sen - himself a former Khmer Rouge cadre - seeking to prevent further prosecutions beyond the five people already indicted.

Lost in all the complaining may be the significance of what is taking place in a country that is still struggling to emerge from lost years of genocide and civil war.

The once-helpless victims of the Khmer Rouge are being given the chance to confront those who 30 years ago treated them as disposable. Those once all-powerful are being brought face-to-face with, and will eventually be judged on, the cruelty and murder they oversaw. "It's generated a discussion about the history of the Khmer Rouge, about impunity, that is extremely important.

The impact has been much more positive than anybody ever anticipated," said Heather Ryan, who has been monitoring the tribunal for the Open Society Justice Initiative, which is funded by billionaire philanthropist George Soros.

In a neighbourhood where Mao's political descendants still hold uncontested power while repressing dissent and stifling discussion of China's dark past, and where Kim's son and Myanmar's generals terrorize their citizens into deference, other leaders can't help but look at the ECCC and wonder if it could one day be them sitting where Duch does today - in the dock, answering charges from those they once considered disposable.

In this part of the world, that truly is extraordinary. 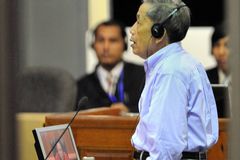 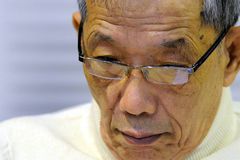