The auto industry's past and present co-exist with its high-tech future on opposite corners of an intersection in Stratford, Ont. If the research being conducted on the southeastern corner achieves its ultimate goal, what's happening on the northwestern side will no longer be necessary.

Computer-chip manufacturer Renesas Electronics Corp. is testing an autonomous vehicle on a dedicated track on the southeastern corner.

On the opposite corner of the crossing, where Lorne Avenue meets Romeo Street – this is, after all, the home of a Shakespearean festival – Lorne Ave. Salvage Yard & Recycling reclaims what it can from wrecked vehicles.

The goal of the Renesas research is to help reduce or eventually eliminate traffic accidents, something that will make life harder for the wrecking yard and several collision-repair centres along the northern side of Lorne Avenue.

The autonomous-vehicle future seems to be rushing toward society at highway speed – there are more technologies every new model year to assist drivers or even take over from them.

Lane-keep assist, which yanks a car back into its lane if it drifts; systems that warn if a driver is getting drowsy; and cameras that help drivers park and alert them if there's someone or something behind the vehicle are just some of the options available.

The 100,000 collisions that occur annually in Canada could be reduced or eliminated by fully autonomous vehicles, Toyota Canada Inc. president Larry Hutchinson told a conference in Toronto earlier this month.

But vehicles that can travel without drivers won't be commonplace even well into the 2020s, Mr. Hutchinson said.

"It's not coming as fast as it seems," he said.

On the test track in Stratford, the future is travelling at a stately 16 kilometres an hour.

John Buszek, senior manager of ADAS (Advanced Driver Assistance Systems) and autonomous-driving systems for Renesas, riding shotgun in the Lincoln MKZ the company is testing, leans over and tells a reporter sitting in the back that, on this test track, 16 km/h is plenty fast.

"We can go faster, but you also notice that in this driving environment, where it's very tight, it's hard to get up to a very fast speed," Mr. Buszek said.

Carlos Wang, the University of Waterloo Autonomous Vehicles Laboratory research engineer who's in the driver's seat, points out that any faster and the ride would be over in a few minutes.

The ride does indeed, take just a few minutes and is uneventful, but even in such a short time, Renesas is gathering data from the movement and from deliberately causing systems to fail.

The sedan always has someone at the wheel when it's moving, not an empty seat.

"That's something I won't allow at this point," Mr. Buszek says as the car travels twice around the track on a recent afternoon. "It's always good to put safety first and have someone in the seat."

That's a step up from how Renesas tested its car last year, when it used the empty parking lot of the Stratford Festival along the Avon River.

Renesas shares data and results with the University of Waterloo, which is testing its own Lincoln MKZ, called Autonomoose, in Waterloo. The chip maker and the university also share results with Blackberry Ltd., whose QNX operating system is on another MKZ that has been driven on public roads in Ottawa.

For the moment, Mr. Buszek and researchers from Waterloo are gearing up the Renesas car to perform more complicated functions at the Consumer Electronics Show (CES) in Las Vegas in January, where the track will replicate the one in Stratford.

The plan is that the car will be able to parallel park itself and navigate through an intersection with oncoming traffic where it will have to make decisions.

The car needs to get into real-world situations, Mr. Buszek acknowledged. "You eventually run out of things that you can test on a track."

On the Stratford track, Renesas is testing four chips that handle the planning, decision-making and control of the steering. At CES, six more will be added to assess perception or effectively the eyes of the vehicle, he said.

The company is also working with the university to use the data from the cameras on the vehicle to figure out where the car is on a map, instead of using expensive global positioning systems.

"They'll be able to figure out from that data where they are on a map," he said. "These are huge upgrades." 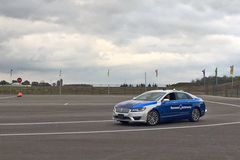 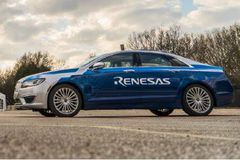 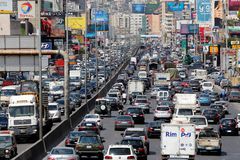