Indigo Books & Music Inc. is dropping its prices on a wider array of books as the retailer tries to keep customers coming to its physical stores in a digital age.

Heather Reisman, chair and chief executive officer of Indigo, said on Monday the retailer would not survive if it had to lower prices on all books in its bricks-and-mortar stores to match online prices.

But to keep customers returning to its physical locations, the country's largest specialty bookseller moved this month to cut the prices of 100 top-selling and staff-recommended books by up to 40 per cent. Previously just 40 top sellers were priced up to 40 per cent off.

In contrast, Indigo's books sold online are priced at up to 50 per cent off.

"If we had to sell books at online prices, Indigo could not continue to exist," Ms. Reisman told reporters after Indigo's annual meeting. Still, in its physical stores "we are looking for some way to bring a little bit of added value to the overall experience."

Retailers are struggling with "showrooming," in which shoppers check out products in physical stores but ultimately purchase them online at lower prices. Indigo benefits from having its own well-established e-commerce site, but still has to battle cyberheavyweight Amazon.com Inc., feeling the pressure to match its low prices and making it more difficult to maintain profit.

Even so, as a result of cost-cutting, more efficient operations and diversified sales beyond books, Indigo managed to reduce its loss in its latest quarter.

As it expanded into more gifts and toys, Indigo improved its fourth-quarter revenue and margins. Its loss for the latest quarter dropped to $13.9-million from $14.4-million a year earlier while revenue rose by $1.9-million to $186.2-million.

"It does narrow already very narrow margins," Ms. Wood said. But she said the markdowns also tend to draw customers to buy the discounted books.

She said the company's core book business last year returned to growth for the first time since the e-reading business emerged in fiscal 2009.

Between 2007 and 2014, the compounded annual growth of books over all was 2.9 per cent, according to Indigo's research. She said the pace of growth of e-books is slowing, with 14.3 per cent of book sales comprising e-books in 2014 and an expected 16 per cent this year.

"Books are in no danger of disappearing at this point," Ms. Reisman said.

She also pointed to big changes and consolidation in the retail industry over all, with Target Canada and Future Shop having closed its stores and Blacks photography about to shut down.

At the same time, megachains such as U.S.-owned Wal-Mart Stores Inc. are rapidly expanding. "Every retailer in the country is impacted by the success of Wal-Mart," she said.

"There's no doubt that the trajectory is: 'If you're average or weak, you're in trouble.'"

Ms. Reisman has led Indigo through three years of massive transformation to respond to the digital upheaval, shifting more into gifts, children's goods and online selling – while watching profits being squeezed.

She said Indigo is now positioned for growth, partly in smaller markets, by adding more Indigo superstores and, in the future, outside of Canada. When asked whether she would phase out the company's Chapters brand, she said: "When we do it, I will be happy to comment. … We're looking at a number of things."

For the full year, Indigo's loss narrowed to $3.5-million from $31-million, while revenue rose to $895.4-million from $867.7-million, despite eight fewer stores. It also pointed to an improved margin rate, lower operating expenses and lower tax expenses.

Its lifestyle, paper and toys business enjoyed double-digit growth, while the launch of the American Girl line of dolls and other products during the year "far exceeded expectations," the company said last month. 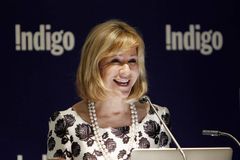 Quebecor to sell Archambault book-store business to Renaud-Bray
May 19, 2015 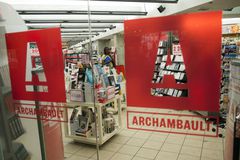