Jim Ellis, chief executive of the Alberta Energy Regulator (AER), said on Tuesday that "we need to have a better view as to who is doing business in Alberta."

Mr. Ellis said it is a concern if inexperienced operators are taking up key positions in Alberta oil and gas companies, and the public body is now reviewing whether it has the tools to identify problems earlier.

The regulator's risk assessment needs to include an examination of the history of companies, he said, including whether Canadian oil and gas production is being funded by "offshore money coming into a company that has never done business like this before."

Mr. Ellis made his remarks as the regulator released its annual report, at a time when a number of high-profile foreign companies have sold oil sands assets and withdrawn investment dollars from Canada's energy sector.

But over the course of the oil-price downturn that has now lasted almost three years, a small flow of capital has continued. As highlighted by a Globe and Mail investigation in May, small-to-mid-size oil and gas producers have been snapped up with private Chinese capital.

The low-profile deals fall below the threshold requiring approval from Ottawa, and at least some of the buying is motivated by a desire to transfer money into hard foreign currency beyond the reach of authorities in Beijing, according to a recent proprietary report from a major Canadian bank.

Toronto-Dominion Bank analyst Menno Hulshof said this month that private Chinese capital flowing into the Canadian energy sector now targets smaller, often-distressed assets and companies. Often, the deals are for less competitive assets. "This could conceivably result in an increased burden on well abandonment," he wrote.

The regulator's experience with oil and gas company Lexin Resources Ltd. has changed its outlook, Mr. Ellis said in an interview. Earlier this year, the regulator took the dramatic step of shutting-in Lexin sites across the province, including almost 1,380 wells and 201 pipelines.

The regulator said the company failed to comply with numerous orders dating from April, 2016. It discovered Lexin had laid off most of its staff and would not be able to respond to emergencies or safety concerns, including those at sour gas wells or its Mazeppa gas processing plant near High River, Alta. The regulator also forced the company into receivership.

Lexin is a private company incorporated in British Columbia. Its sole director is Michael Smith, who "relied upon in-country managers and other personnel for the operations of Lexin," according to an agreed statement of facts between the AER and Lexin. A corporate search lists Mr. Smith's mailing address in Hong Kong.

The battle over the regulator's move had been playing out in the courts. But this month, the AER put out a statement saying it had agreed to work together with Lexin and Mr. Smith to help the receiver proceed with the sale of Lexin-licensed assets. The deal is bookended with Mr. Smith agreeing to pay the regulator $175,000 in recognition of his responsibility for "uncontested breaches."

"From my perspective, Lexin is a big one. But they're not the last one," Mr. Ellis said.

"We need to have an understanding of who these companies are, because we have had an issue in a company like Lexin," he said. "We didn't really have a good view to what was going on."

He added that the AER won't become a financial regulator, but "we have a responsibility to make sure that companies perform very well. We would prefer to have to have a view as they come into our system so we know who they are – so we're ready." 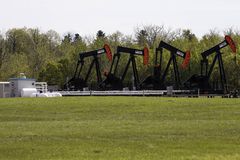 Oil producers bank on homegrown push to drive competition Subscriber content
April 12, 2017
Oil firms projected to slash spending for third straight year
June 13, 2017
Follow Kelly Cryderman on Twitter @KellyCryderman
Report an error Editorial code of conduct
Due to technical reasons, we have temporarily removed commenting from our articles. We hope to have this fixed soon. Thank you for your patience. If you are looking to give feedback on our new site, please send it along to feedback@globeandmail.com. If you want to write a letter to the editor, please forward to letters@globeandmail.com.
Comments