Alberta is stepping in to support TransCanada Corp.'s Keystone XL project, drawing scorn from environmentalists while inching the long-stalled pipeline closer to fruition.

TransCanada said on Thursday that it has secured shipping commitments totalling roughly 500,000 barrels a day for the $8-billion (U.S.) pipeline, including a deal with the Alberta government to ship 50,000 barrels a day of provincially owned crude on the line.

The announcement helps ease doubts that had persisted about the project's commercial viability.

But the provincial support also shows major oil producers remain leery of signing binding 20-year contracts for a project with an uncertain and contentious future.

"They're kind of taking that bet that the Gulf Coast is going to want to take that crude, mixed with the fact that it's going to necessarily buoy the crude prices if they get this pipeline in," Wood Mackenzie analyst Zachary Rogers said.

"Producers aren't going to jump at the bit to sign a 20-year contract if they're not entirely sure that the market is going to want the crude," he added. "But signs this year are tilting in their favour."

TransCanada called the Alberta government's commitment to the project, which has a capacity of 830,000 b/d, "instrumental." But it stopped short of issuing a final approval, saying it will seek additional long-term contracts with customers.

Barrels of the extra-heavy Western Canadian Select crude for future delivery on Thursday fetched around $39.71, a discount of $24 against the main North American benchmark price, according to broker Net Energy Inc.

Although it did not commit to building the project, TransCanada said early construction could start in 2019. Spokesman Terry Cunha said the company also requires federal permits in the United States and easements from landowners in Nebraska before proceeding.

The project would send crude from Hardisty, Alta., through Steele City, Neb., to the U.S. Gulf Coast, where big refineries geared to process superthick oil are eager to replace falling imports from Venezuela and Mexico.

Regulators in Nebraska last November narrowly approved an alternative to TransCanada's preferred route through the state, removing a major hurdle for the project after approval by U.S. President Donald Trump last March.

But the project is one of three major proposals jockeying for commercial support, at a time longer-term growth prospects in the oil sands have slowed considerably. That has complicated efforts to secure customers for the project.

Last fall, TransCanada extended its deadline to sign up shippers. Enbridge Inc. had earlier called potential government support for the project an unnecessary subsidy, a sign of heightened competition between the cross-town rivals.

Enbridge declined comment on Thursday, but it has previously warned the industry could face a temporary glut of export capacity should Keystone XL, Kinder Morgan Inc.'s Trans Mountain and its own Line 3 pipeline all proceed as planned.

For now, however, oil sands producers remain beset by pipeline constraints as production surges, the result of investments made before the downturn. That has heaped pressure on prices for the extra-heavy oil and revived fears of short-term export bottlenecks.

Alberta is supporting the pipeline with the small portion of crude it receives in lieu of cash royalties, a strategy it has used to backstop refineries and other projects such as pipelines it believes will provide the province with an economic boost.

The latest deal partly replaces the 100,000-b/d, 20-year commitment – worth nearly $5-billion (Canadian) – that the Alberta government had made on TransCanada's now-cancelled Energy East pipeline project.

Environmentalists on Thursday characterized provincial support for Keystone XL as a "bailout" for a project that still faces various legal challenges and continued resistance from landowners along the new route.

"Any project that needs a government bailout amid a quagmire of ongoing legal and regulatory challenges has little chance of moving forward," Adam Scott, of advocacy group Oil Change International, said in a statement.

Alberta Premier Rachel Notley said the province has strengthened its environmental case by placing a cap on greenhouse gas emissions from the oil sands. However, bitumen production is still increasing – and the demand for it is there if the heavy oil can get to market.

Ms. Notley said she signed the deal with TransCanada – and continues to push for the Trans Mountain expansion – over her concern that Albertans get the most gains possible from the province's resources.

"By ensuring that we can transport our product as cheaply and as efficiently and as safely as possible, in all manners, we're able to ensure greater return for Albertans," she told reporters on Thursday. 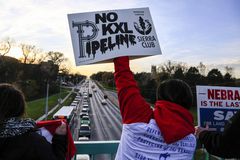