They are the little brothers and sisters of the pipeline world. Some are barely large enough to jam a hand into, but they do the dirtiest work in the energy business, ferrying great volumes of raw oil and gas from wells to processing plants.

And though they are small, they often carry large risk, an issue of mounting concern in Alberta, a province that has seen a series of spills train a global spotlight on pipeline safety.

These smaller pipes can often be overlooked, next to the big ones that garner attention when they rupture into the Kalamazoo River – an accident that cost Enbridge Inc. a historic $3.7-million (U.S.) fine this week, on top of $725-million in cleanup costs – or at an Alberta pumping station where the company recently had another large spill.

But in Alberta, the pipe is almost all small. Some 327,000 kilometres of pipe that is eight inches and smaller in diameter spread across the province like a network of veins. It is roughly 90 per cent of all pipe in the province, a vast web of steel that is uniquely vulnerable to problems, and uniquely difficult to both oversee and maintain.

In large measure, that's because the stuff those pipes carry is often nasty: impure, unprocessed energy laced with hydrogen sulphide and water and sand, each of which can inflict damage on buried steel. Construction methods of smaller pipes mean they often can't be monitored and inspected using the best tools. Some of the junior and mid-sized oil and gas companies that run them don't have the large dedicated inspection teams employed by larger pipeline operators.

But some who inspect pipelines say major change is needed if smaller-diameter conduits are to match the safety standards of larger pipes. For now, small pipes that can't be properly inspected are "the weak link in the integrity chain," said Stefan Papenfuss, vice-president of pipeline resources for Seattle-based Quest Integrity Group LLC, a major pipeline maintenance provider. "They are now higher risk to the operators than their mainline transmission lines."

Adding to the concern, spills from smaller pipelines often release noxious chemicals that worsen the impact. Saline water laced with hydrocarbons is tough to clean up and environmentally damaging. "Sour" products containing hydrogen sulphide are a serious human health concern.

Alberta's oil and gas regulator, the Energy Resources Conservation Board (ERCB), noted in a 2007 report that "most of Alberta's pipeline infrastructure is used for the production of raw oil and gas, which by nature can be highly corrosive." It said corrosion has been growing as a problem – from 63 per cent of all leaks and ruptures in a 1998 report to 70 per cent less than a decade later.

And though overall accidents have been declining, last year Alberta saw 1.5 failures per 1,000 kilometres of pipe – or nearly 500 on its length of small lines. That's down from an average in previous years of 3.5. Many of those spills are small – all leaks, regardless of size, get reported. But the ERCB also doesn't record spills at pipeline facilities, like pumping stations, where many of them happen. That makes its numbers tough to compare with other jurisdictions.

The risks on small pipes are magnified by the low flows on stretches that might carry intermittent volumes of product from, say, oil tanks to a processing plant. When flow is slow or stopped, water and hydrogen sulphide are better able to corrode pipe. Sediments can also deposit, creating a mud where microbes can begin to eat away steel.

Together, those element "go in to attack the line," said Izak Roux, technical manager for RAE Engineering and Inspection Ltd., which specializes in pipelines.

The ERCB played down the effect of corrosive products, which tend to create "pitting corrosion" that leads to "small volume spills (small leaks) that are not a significant safety hazard because they do not catastrophically rupture," spokeswoman Cara Tobin said in an e-mailed statement.

(Although small pipes can lead to big spills: In December, 2011, 12,000 barrels spilled from a small Pengrowth Energy Corp. line, while 5,000 barrels leaked from a small Pace & Oil Gas Ltd. well pipe in May). The regulator requires surveillance of pipeline right-of-ways, corrosion evaluations, yearly inspections of water crossings and "continues to review and update its regulations and requirements to improve all aspects of pipeline performance," she said.

Plus, industry has ways to combat corrosion. Pipelines can be built out of non-steel materials like fibreglass and polyethylene. The percentage of those has grown, although 90 per cent of Alberta pipe is still steel. Pipes can be protected with "cathodic protection," which uses electric current to counteract corrosion and is mandatory in Alberta. They can also be chemically shielded from corrosion, and maintained with pigs, devices that travel inside the pipe, either to scrub it or detect areas of weakness.

But small pipe is often the hardest to "pig." Worldwide, roughly a third of all pipe is not piggable. Alberta's ERCB has no figure on what percentage of its pipe cannot accept pigs – and pigging is not required – but it's likely to be large. Alberta's pipeline system is made up of an enormous number of very short lengths, averaging just 1.6 kilometres long.

And short distances add to the difficulties of pigging pipe, since each length of pipe must be outfitted with an entry and exit point for a pig – a difficult, and expensive, proposition when there are so many. "There's a huge market up there of unpiggable pipelines," Mr. Papenfuss said. 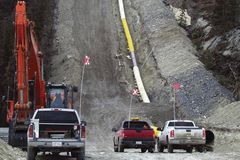 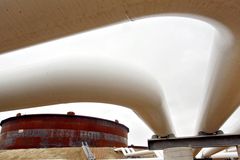