In trying to answer this question, a number of governments and organizations have attempted to measure the carbon intensity of oil sands production – which involves extracting heavy, thick oil called bitumen from the ground.

The studies take a "well-to-wheel" approach, taking into account the emissions from extraction, processing, transportation and consumption of crude.

An Alberta government-sponsored report, however, concluded that the difference is smaller than the EU report suggested. The Jacobs Consultancy report said Alberta oil sands crudes have a carbon intensity 12 per cent higher than several common crudes consumed in Europe. Alberta has said the oil sands have been unfairly picked on while the European Union has underestimated the emissions of its crude supplies from countries such as Russia, Saudi Arabia and Nigeria.

Environmental groups have raised doubt about the Alberta numbers, saying the report compared the best oil sands projects to the highest emission production in Europe. On a total life cycle basis, the Pembina Institute, an Alberta-based environmental consultancy and advocacy group, says oil sands greenhouse gas emissions intensities are between 8 and 37 per cent higher than conventional crude.

And the U.S. Congress conducted its own study of oil sands crude earlier this year in the midst of the raging debate over the proposed Keystone XL pipeline to bring oil sands crude to Gulf Coast refineries. That assessment said well-to-wheel GHG emissions are, on average, 14 to 20 per cent higher for Canadian oil sands crudes than for the weighted average of transportation fuels sold or distributed in the U.S., based on a 2005 reference year.

Opponents of the oil sands industry growth argue that regulations enacted by the province and Ottawa won't result in meaningful emission reductions as industry production steadily ramps up.

This week, Alberta's energy regulator predicted output from the province's oil sands will about double to 3.8 million barrels a day by 2022, compared with just under two million barrels now.

But both levels of government and industry say even if absolute emissions are growing as more crude is produced, the province has implemented a carbon levy for major carbon emitters – unlike most other jurisdictions – and is investing in carbon capture and storage. Canadian politicians say U.S. coal plants are a bigger carbon concern, and Alberta's environmental standards are better than those seen in shale oil production in the U.S. Bakken region, where, for instance, natural gas flaring is a common practice. 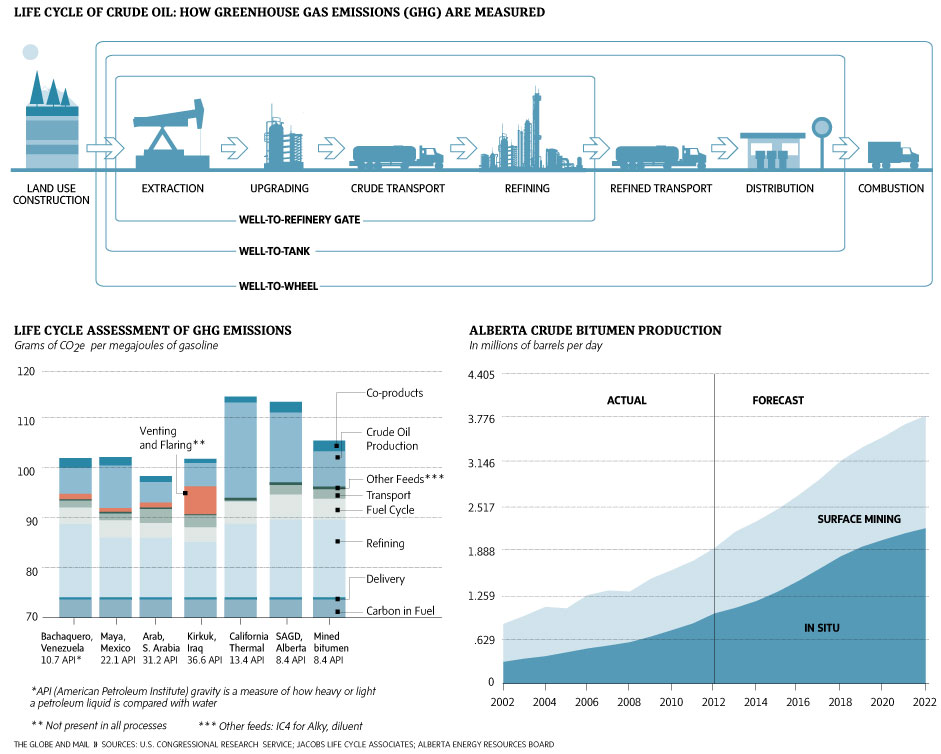 1. The oil sands carbon footprint compared with other crudes

Oil sands opponents criticize the industry as a dent in Canada's environmental record. Proponents counter, arguing that the information their adversaries produce is skewed. Jacobs Consultancy, in a report sponsored by Alberta and released last year, said the European Union underestimated emissions from many of its sources of crude by failing to account for unreported venting of natural gas. Alberta crudes have a carbon intensity – or greenhouse gases per barrel of oil – that is 10 to 12 per cent higher than several common crudes consumed in Europe, the firm said, while 22 of the 26 crudes used in Europe had emissions exceeding the proposed EU regulation.

Carbon intensity measures the amount of carbon emitted for every barrel of oil produced. Overall carbon measures total emissions. As technology advances in the oil sands, carbon intensity is falling – although spikes can appear when new projects go through their startup phases. Suncor Energy Inc., Canada's largest oil sands company, noted in its 2011 sustainability report that it reduced its greenhouse gas intensity at its oil sands plant by 50 per cent from 1990. But while intensity may fall, the industry's overall carbon emissions will climb as activity in the oil sands expands.

Transportation is a hot point in the carbon debate because oil sands supporters want Alberta's production compared to other oil after transportation is taken into account. Shipping oil by tanker, for example, jacks up emissions. Oil used in France may have originated in Africa. Oil burned in Colorado may have been extracted in Venezuela. Oil sands proponents argue the emissions tied to shipping crude to refineries and then to consumers must be considered when comparing emissions. Pipeline companies also use the argument when lobbying for support of their proposals and Alberta's oil sands. Trans- Canada, citing the U.S. Department of State, notes the Keystone XL oil sands pipeline will offset as many as 200 ocean tankers a year. This equates to lowering greenhouse gas emissions by 19 million tonnes. Using trains to move oil, TransCanada notes, produces three times as much greenhouse gas as pipelines.

The oil sands industry began as giant mining operations, but expansion is now focused on less-intrusive steam-assisted gravity drainage wells – which also have a heavier carbon footprint because companies need to burn natural gas to heat water to create steam in order to extract bitumen. Roughly 80 per cent of Alberta's bitumen deposits will be extracted using such methods. However, Cenovus Energy Inc., which has one of the lowest steam-to-oil ratios among SAGD players, argues that by the time its average barrel of oil reaches refineries in North America, the resulting greenhouse gases are roughly equal to the average emissions of any other oil refined on the continent, including crude from overseas – which has a heavier carbon footprint resulting from hefty emissions from shipping.

5. Europe doesn't use Alberta oil, so why is the EU passing anti-oil sands fuel directives?

While the European Union does not import Canadian crude, it could potentially import product from the United States – which means refined product from the oil sands could end up in the EU. Further, if Canada constructs a west-to-east pipeline, the chances of bitumen landing in Europe also exists. Also, the EU is attempting to discourage refiners from increasingly relying on the most carbon-intensive fuels, and established general categories for "conventional crude" as well for "bitumen" – whether from Alberta or Venezuela – and for "oil shale" that may be developed in Estonia.

—Shawn McCarthy
Follow Kelly Cryderman on Twitter @KellyCryderman
Report an error Editorial code of conduct
Due to technical reasons, we have temporarily removed commenting from our articles. We hope to have this fixed soon. Thank you for your patience. If you are looking to give feedback on our new site, please send it along to feedback@globeandmail.com. If you want to write a letter to the editor, please forward to letters@globeandmail.com.
Comments