Jim Doak was braced to play hardball when he flew to Mongolia last weekend to nail down a multimillion payment from the government.

The prominent Toronto fund manager and chairman of Canadian junior miner Khan Resources Inc. had been waging a high-stakes international legal battle against Mongolia since 2009, when the company claimed the Asian country had illegally seized its uranium mining project.

Khan Resource's luck turned in March when an international arbitration tribunal ordered Mongolia to pay more than $100-million in compensation for a mine that was later acquired by a state-owned Russian company.

When discussions with Mongolian representatives failed to produce a payment several weeks ago, Mr. Doak and Khan's chief executive officer Grant Edey accepted an invitation to fly to the country's capital, Ulan Bator, this week for another round of talks.

Mr. Doak was not optimistic about the outcome. In an interview with a Globe and Mail reporter days before he travelled to Mongolia, he said the company had taken steps to enforce its right to compensation. Khan Resources, he said, had hired an unidentified company that specialized in collecting delinquent government debts by seizing assets, such as airplanes or ships temporarily located outside the country.

"These are experienced people, we will get our money," he said.

Mr. Doak correctly predicted that Mongolian negotiations would founder. After two days of what company insiders described as difficult and unproductive discussions, Khan Resources issued a terse press release Thursday stating it had demanded "full and prompt payment" from Mongolia and it had "retained the services of specialists" to collect the unpaid compensation award.

Whether Khan's forceful tactics deliver results will never be known by Mr. Doak. According to one person who declined to be identified, Mr. Doak became ill hours after talks broke off in Ulan Bator Wednesday. He cancelled a planned dinner with Mr. Edey and returned to his hotel room to rest before an early morning flight back to Canada the next day. When Mr. Doak did not reply to text messages on his smartphone, hotel staff were alerted and he was found without vital signs.

The timing of Mr. Doak's death so soon after negotiations broke down was initially perceived as suspicious by some company officials and investors. But, by late Friday, some friends and family were reaching the conclusion that Mr. Doak, a diabetic, may have died from natural causes.

"This is a very difficult and emotional situation for everyone and we have yet to get all of the answers. But, at this time, Jim's death does appear to have been a result of natural causes," said David McAusland, a Khan Resources director and long-term friend of Mr. Doak's.

People familiar with the case said that an autopsy was conducted on Mr. Doak at the request of Mongolian police and results are expected Monday. Mr. Edey has remained in Mongolia and plans to return with Mr. Doak's remains next week.

In an e-mail to the Globe and Mail, Mr. Edey said "I have seen no signs of foul play" in relation to Mr. Doak's death.

He said local officials are conducting an autopsy "consistent with the regulations and protocols of this country."

Julian Dierkes, professor at the Institute for Asian Research at the University of British Columbia, said that, although the timing of Mr. Doaks death is "eerie," he does not suspect foul play. "There isn't a history of targeted violence in Mongolia, neither domestically, nor towards foreigners."

Khan Resources director Marc Henderson said the company will continue with its "protracted" efforts to claim an award that would not have been possible without Mr. Doak's determination.

"Jim is probably one of the more principled guys you would ever meet in business and he was part of the fire that got us this far," he said. "A lot of companies, confronted with the situation we found ourselves in would not have taken it where it's ultimately gone obviously with success." 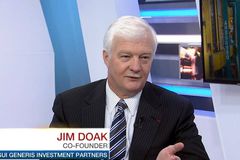