But within days, legions of tradespeople were packed on to buses and sent to isolated lodges north of the Fort McKay First Nation. For many, it was their first stop in a two-part evacuation – the second in as many weeks – as shifting winds and tinder-dry conditions pushed flames closer to industrial plants run by Suncor Energy Inc. and Syncrude Canada Ltd.

Thousands were eventually airlifted from Suncor's Firebag site to Edmonton and Calgary, as the fast-moving blaze chewed through a worker lodge and threatened others farther to the south. At times, there were as many as 10 planes waiting on the tarmac, one evacuee said.

Some employees and contractors now question whether the companies put profits ahead of safety in a rush to restart operations in what remains an active emergency zone. They spoke to The Globe and Mail on condition of anonymity for fear of losing their jobs.

"Yeah, without a doubt," one contractor, who was working at Suncor's base operation before being evacuated Tuesday, said in an interview. "They lose so much money a day that that's all they see."

However, the desire to get back to work is also strong. "I'm glad I did it, to a point, but I want to be at home now," he said from an evacuation camp in Wapasu, Alta. He returned to Edmonton on Tuesday.

Oil sands producers are losing an estimated $70-million a day as the worst disaster in Alberta's history intensifies, scuttling efforts to quickly restart more than one million barrels a day of lost production. Emergency officials have said that companies are on the hook for costs associated with the second evacuation.

Analysts at Citigroup Global Markets Inc. said Wednesday that total lost production could rise from 14 million barrels to more than 25 million barrels should outages persist for another week.

A skeleton crew of about 100 remained at Syncrude's Mildred Lake and Aurora bitumen mines as of midday on Wednesday. The Aurora mine is about 35 kilometres northeast of Mildred Lake and 70 kilometres from Fort McMurray. It was not included in a mandatory evacuation order issued by the province on Monday. Neither facility is producing oil.

Suncor began implementing plans to resume production on May 8, according to a news release. Syncrude re-energized a portion of its plant two days later, an initial step toward boosting production. Industry executives met with Alberta Premier Rachel Notley on May 10. Key infrastructure was seen as largely intact, adding to hopes for a speedy recovery.

Representatives with Syncrude and Suncor said restart plans were made using the best available information at hand, working with the province and emergency personnel. Conditions appeared to be improving, making it possible to safely resume operations, they said.

This week, however, flames destroyed Horizon North Logistics Inc.'s Blacksand Executive Lodge. On Wednesday, the blaze was still threatening Noralta Lodge Ltd.'s Fort McMurray Village, which is 26 kilometres northwest of the city, spokeswoman Blaire McCalla said. About 2,300 guests and staff had already been forced to leave the 3,500-room lodging complex.

"The fire has been difficult to predict. I think that everyone understands that," Syncrude spokesman Will Gibson said.

"But one reason why we did feel confident that we could go back and restart is we had contingencies in place to protect the safety of the work force up there. We've enacted some of those, and as things evolve up there, if need be, we've got plans in place to safely move the rest of our work force out."

Suncor shut down its base operation as well as two steam-driven oil sands projects as conditions deteriorated. "Clearly the situation has changed, and that's why we immediately responded on Monday night," spokeswoman Sneh Seetal said.

The push to restart its base plant came with complications. The contractor returned to the operation last week and was briefed on an evacuation plan. Hiccups like needing to retighten bolts are standard when restarting facilities, he noted, but an encroaching fire is an unusual risk.

Normally, the worker said, people in his position would wear monitors that measure only hydrogen sulphide. This time, they were outfitted with sulphur dioxide monitors as an extra precaution. "We had a lot of rush jobs," he said.

Businesses grapple with growing risks from wildfires Subscriber content
May 16, 2018 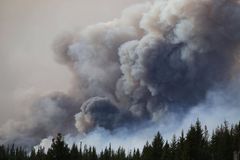 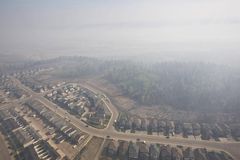