A tentative deal between a B.C. First Nations group and a major liquefied natural gas venture shows that even long-stalled energy projects have a glimmer of hope to win over opponents.

But this week, the First Nations group took long strides toward resolving differences by unveiling an agreement with Pacific NorthWest LNG, TransCanada Corp. and the B.C. government. Pacific NorthWest LNG, led by Malaysia's state-owned Petronas, is backing the bulk of the $1.15-billion benefits package aimed at winning aboriginal consent for building an $11.4-billion LNG export terminal on Lelu Island.

The Lax Kw'alaams have lingering worries about salmon habitat in Flora Bank, located next to the proposed LNG site near Prince Rupert.

Pacific NorthWest LNG is offering $1-billion in cash over 40 years to the Lax Kw'alaams while the B.C. government is proposing to transfer 2,200 hectares of Crown lands, valued at $108-million, in the Prince Rupert harbour region to the aboriginal group.

The tentative pact, which will be voted on with a show of hands by band members starting on Monday and ending May 12, sets a new standard for sharing the benefits of major projects. The deal sets a high bar for garnering First Nations' consent for resource proposals in British Columbia, where most of the land base is still subject to native land claims and many energy-related projects are stalled as a result of aboriginal opposition.

Since blanket solutions are elusive, each project must be examined on a case-by-case basis, said Art Sterritt, executive director of the Coastal First Nations. "This is not oil – an accident with an LNG tanker is not going to destroy the coast, and Lax Kw'alaams people know that. It's not going to wipe out the whole culture and economy," Mr. Sterritt said in an interview Friday. "From my perspective, the vote has probably got a better than 50-50 chance of passing."

In the case of Pacific NorthWest LNG, the joint venture is promising skills training and jobs for qualified members of the Tsimshian, which includes the Lax Kw'alaams, Metlakatla, Kitsumkalum, Kitselas, Gitxaala and Gitga'at. The Canadian Environmental Assessment Agency consulted with those native groups, but four others have complained of inadequate consultation. The aboriginal-backed Skeena Fisheries Commission sees threats to salmon habitat.

The federal environmental agency began its review of the Petronas-led project in April, 2013, and the much-delayed assessment is slated to stretch into September.

Lax Kw'alaams leaders acknowledge that there remain unanswered questions about Pacific NorthWest LNG's environmental impact, but they opted to take the 40-year pact proposal to the 3,600 members to let them debate the merits of the LNG terminal and TransCanada's Prince Rupert Gas Transmission pipeline plan.

Aboriginal opposition has been a key stumbling block as the energy industry clamours to tap richer global markets from Canada's West Coast.

The company is negotiating with dozens of aboriginal communities along two proposed pipeline corridors in British Columbia, offering construction jobs and "enduring economic benefits" associated with the projects, he said after TransCanada's annual meeting in Calgary.

Each agreement is tailored specifically to meet local needs, an approach the company plans to repeat as it tries to build support for its $12-billion Energy East pipeline to Canada's East Coast, he said. "I think you have to take into account the unique circumstances of each individual community," Mr. Girling said. "Do they have unsettled land-claim issues, and how do you deal with those things?"

He added there is a "high probability" that the Petronas-led group will make a final investment decision on the LNG export terminal by the middle of this year. Some industry experts say it will take until September for Pacific NorthWest LNG to give the final go-ahead on construction or decide to postpone.

Proposals being voted on: Petronas-led Pacific NorthWest LNG export terminal on Lelu Island and TransCanada's Prince Rupert Gas Transmission pipeline plan. Lax Kw'alaams being offered $1-billion in cash over 40 years, plus title to a portion of B.C.'s coastal lands in exchange for consenting to projects.

Decision after voting with show of hands: "After the community meetings have been held, and members have provided their views on the two projects by way of a vote, Lax Kw'alaams leadership will carefully consider the feedback from membership and make a decision to either support or oppose the Pacific NorthWest LNG facility and the Prince Rupert Gas Transmission pipeline project," according to the bulletin. 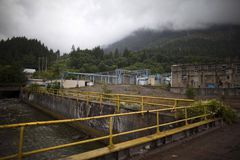