British Columbia's NDP government is facing controversy over liquefied natural gas as environmental groups warn that a project led by Royal Dutch Shell PLC will derail the province's efforts to transition to a low-carbon economy.

LNG Canada would be a massive endeavour with 7,500 workers at the construction peak. The proposal calls for spending up to $40-billion to develop the infrastructure and terminal required to export the fuel from Kitimat in northwestern British Columbia to energy-thirsty markets in Asia.

Premier John Horgan and Energy Minister Michelle Mungall toured the Kitimat industrial site on Saturday. The NDP formed a minority government in July after striking an alliance with the BC Green Party led by Andrew Weaver, who opposes LNG development.

The government believes B.C.'s fledgling LNG sector "has an important role to play," Ms. Mungall said in a statement on Saturday night. "Despite the changes in the marketplace, we believe there is still an opportunity for B.C.'s LNG industry in the long term."

The NDP emphasizes that LNG projects must meet conditions, such as working in partnership with Indigenous groups and respecting the province's commitments to fighting climate change. "Our government has initiated a comprehensive review of British Columbia's LNG industry and the industry's capacity to compete globally. We are engaging with industry, First Nations and the federal government for feedback," Ms. Mungall said.

Critics say the Shell-led LNG Canada venture would seriously undermine the province's climate targets to reduce greenhouse gas emissions by 2050. Clean-energy think tank Pembina Institute warns that in order to be on track with B.C.'s climate targets, only a couple of small LNG terminals are plausible for the provincial economy.

But LNG Canada is touting the global benefits of exporting LNG, hoping the NDP government will take a worldwide view of the project's impact on the environment such as lessening air pollution in coal-consuming China.

Susannah Pierce, external affairs director for LNG Canada, said a broad perspective should be taken, including measuring GHG emissions on a global scale because China and other Asian energy importers would benefit from switching to LNG from coal for fuelling power plants.

"If you're able to export natural gas that's at a competitive and economic price, then it's more likely that you're going to [displace] coal because coal is really the competitor for the higher heat applications," Ms. Pierce said in an interview. "What is the easiest way for us to have reliable energy when renewable energy is still intermittent? Right now, we need it all. We really need the natural gas out there because renewables essentially aren't going to take the place of high-heat coal boilers."

LNG Canada is aiming to perform better than British Columbia's standard for "emissions intensity," targeting 0.15 carbon-dioxide-equivalent tonnes for each tonne of LNG produced – less than the province's limit of 0.16.

"There is no international mechanism right now to recognize any gas exports from Canada to Asia that might displace coal," Ms. Pierce said. "You do need to take a look at carbon offsets. We can still help the province meet its climate-change goals by using domestic offsets. It could be purchasing offsets and/or funding green technology."

If the Shell-led consortium decides to forge ahead, construction is expected to be completed in late 2023. LNG Canada would be subject to the province's carbon tax, currently at $30 a tonne and set to gradually increase to $50 by 2021.

"With respect to the LNG industry's environmental requirement – currently, B.C. LNG facilities have to meet the greenhouse gas regulatory benchmark of 0.16 tonnes CO2 equivalent per tonne of LNG produced. LNG facilities may use B.C. offsets to achieve the benchmark," Ms. Mungall said.

Maximilian Kniewasser, a program director at the Pembina Institute, said British Columbia should adhere to the Paris accord's country-specific targets for reducing carbon emissions, and LNG should not be considered a global solution to combat climate change.

"We shouldn't claim credit for the emissions reductions from displacing coal in export markets in order to justify missing our own climate targets," he said. "This will result in double counting. Each jurisdiction has made climate commitments and it is important that all of us meet the targets that we have set."

Despite much hype from the ousted BC Liberal Party, which forecast economic prosperity from LNG, no export terminal is under construction in British Columbia.

LNG Canada, considered by analysts to be the last and best hope for a major B.C. LNG project, has set a Nov. 30 deadline for accepting bids from four groups competing to be the prime contractor. A final investment decision is expected by the end of 2018.

The project would use natural gas in the liquefaction process in which high-efficiency General Electric LMS100 turbines supercool gas into liquid form, while relying on hydroelectricity for a supporting role, including auxiliary power. 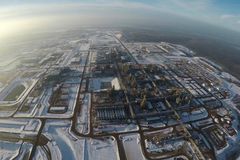