Canada's oil sands industry is pumping record volumes of crude despite sinking profits and warnings of an extended stretch of weak prices.

Some of the sector's largest players – including Suncor Energy Inc., Imperial Oil Ltd. and Cenovus Energy Inc. – are dumping more oil into one of the shakiest energy markets in years, defying the 50-per-cent plunge in prices that has prompted thousands of layoffs and hammered earnings across the board.

The industry is betting that multibillion-dollar expansions will pay off over time, even as some executives warn that the sharp downturn in commodity prices since last summer is only just getting under way.

"Stay tuned," said Rich Kruger, chief executive of Imperial, at the company's annual meeting of shareholders on Thursday in Calgary. "We're still early in this cycle and the dust hasn't settled."

The uncertain outlook adds to fears that recent strength in U.S. and world oil prices may be short-lived, as economic growth in key markets stays sluggish and members of the Organization of Petroleum Exporting Countries show few signs of curbing output.

West Texas Intermediate crude for future delivery climbed $1.05 (U.S.) to $59.63 a barrel in Thursday trading, up 25 per cent from the beginning of April.

The U.S. benchmark price plunged by more than half from June, 2014, and January of this year, exacting a heavy toll on industry profits and employment levels. But oil sands firms have boosted production anyway – in some cases to record levels – while at the same time stepping up cost-cutting efforts to offset slim margins.

Suncor said late Wednesday it pumped 440,400 barrels a day from its oil sands operations in the first quarter, up 11 per cent from levels in the same period a year ago. The company lost $341-million (Canadian) in the period and cut another 200 jobs from its headquarters and a satellite office in Toronto. That's in addition to 1,000 layoffs announced earlier this year.

Imperial said Thursday it boosted oil sands production to 219,000 barrels a day in the first quarter, up 11 per cent from last year. The company, which is majority-owned by Exxon Mobil Corp., said quarterly profit was more than cut in half to $421-million. It plans to double output at its 110,000-barrel-a-day Kearl mine this year and recently started production at its steam-driven Nabiye development near Cold Lake, Alta.

Cenovus also increased output in the quarter, to 144,000 barrels a day, it said this week.

The increases reflect a conundrum: They help oil sands companies lower costs per barrel as facilities become more efficient, even as operators earn less on each barrel.

Suncor, for example, said its cash operating costs in the oil sands fell to $28.40 a barrel in the quarter, down from $35.60 in the year-ago period, on a combination of higher volumes, lower natural gas prices and reduced maintenance.

However, the company slashed its outlook for oil prices this year. It now expects WTI oil to fetch an average of $54 (U.S.) this year, down from $59 a barrel previously. "I think everybody's been surprised about how slow the supply side repsonse has been," Suncor CEO Steve Williams said on Thursday.

A price recovery could be choppy, he added, tempered by a possible revival of U.S. shale output and storage levels that remain well above historic levels. He said the company could take "additional steps" to curb costs if crude prices remain subdued, but did not elaborate.

Together with partners Total SA of France and Teck Resources Ltd., Suncor is proceeding with the most ambitious new oil sands mining project in years. Construction on Fort Hills, a $13.5-billion development, is now 25-per-cent complete, the company said. The project will add 180,000 barrels a day of new capacity over time, with first oil targeted for late 2017.

Suncor insists it is taking advantage of a steep decline in service costs as it ramps up spending on the megamine.

Some 1.2 million barrels a day of new oil sands capacity has been shelved since last summer, easing demand for some labour and equipment, according to Imperial's Mr. Kruger. Companies with projects on the go are keen to claw back costs, in some cases pressing suppliers for price breaks of as much as 25 per cent.

"You can't be selling a product where the price of that product has fallen in half in a very short time and keep the same cost structure," Mr. Kruger told reporters, without providing specific targets. "The entire supply chain has to participate in that." 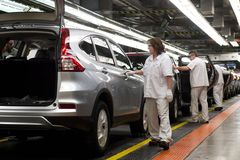 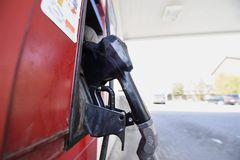