A small biotechnology firm from Gatineau had a lot riding on Qantas Flight 96 that was scheduled to leave Los Angeles late Sunday night for the 15-hour journey to Melbourne, Australia.

For the first time, Agrisoma Biosciences Inc. provided biofuel derived from brassica carinata, an industrial oilseed developed by the company, to fuel a transoceanic flight. Agrisoma is marketing its biofuel to the global aviation industry that has committed to reduce greenhouse-gas emissions as part of the worldwide effort to avert the catastrophic impacts of climate change.

To mark the maiden flight, Agrisoma's chief executive Steve Fabijanski joined Qantas International CEO Alison Webster and Quebec's Energy Minister Pierre Moreau for a ceremony at Los Angeles International Airport on Sunday. The executives touted a partnership between the Gatineau startup and Australia's biggest airline to develop a supply chain – including farmers and refiners – that will provide the carrier with a steady stream of carinata-based jet fuel within two years.

"We don't see this as a stunt; we see this as a first flight of many," Mr. Fabijanski said in an interview before heading to Los Angeles. "There's a commitment [by the two companies] to assemble the elements for what will be the lowest carbon footprint flight between the United States and Australia."

Carinata is similar to canola, but its oil is not suitable for human consumption. Agrisoma works with farmers in the Americas and now in Australia to plant fields of it, and then sells the oil to refineries that can transform it into jet fuel.

Flight 96's Boeing Dreamliner 787-9 was fuelled by a blend of traditional jet fuel and 10 per cent carinata oil; Qantas is also employing the most fuel-efficient jet available for the long-haul flight.

"Our partnership with Agrisoma is a big step in the development of a renewable jet fuel industry in Australia," Qantas's Ms. Webster said in a release Sunday. "It is a project we are really proud to be part of as we look at ways to reduce carbon emissions across our operations."

Carinata-derived biofuel can reduce carbon emissions by 80 per cent compared to traditional jet fuel, on a life-cycle basis from production to consumption. The 10-per-cent biofuel blend used on Sunday's flight will result in a 7-per-cent reduction in emissions on the route compared to normal operations, Qantas said.

The deal with the Australian carrier marks a major lift for Agrisoma, a 10-year-old, privately held company that also supplies the biofuel to refiners in Europe, the southeastern United States and South America. The CEO said he is hoping to strike similar deals with Canadian carriers.

A key catalyst for its growth is the agreement reached by the International Air Transport Association (IATA) in 2016 to address greenhouse-gas emissions in the fast-growing international side of the aviation business. IATA-member airlines from 70 countries agreed to a deal that would cap emissions by 2020 and then reduce them by 50 per cent by 2050.

Mr. Fabijanski has big ambitions. "Our belief is that we can provide one-third of current jet fuel usage from sustainable fuel derived from carinata," he said.

The use of biofuels has been controversial as critics complain producers often rely on food crops like corn, or use agricultural land to produce fuel crops, or contribute to deforestation by cutting down forests and planting palm trees to produce oil-based fuels.

However, carinata does not require a lot of water, pesticides or fertilizer, and the company is working with farmers to utilize only land that is not being cultivated, or to use the oilseed in crop rotations to replenish soils.

Agrisoma's use of carinata was certified as sustainable by the Roundtable on Sustainable Biomaterials, a Swiss-based non-governmental organization that includes several United Nations agencies among its members. 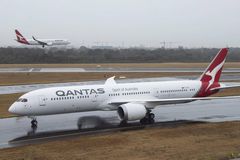