China's CNOOC Ltd. is shutting down Nexen Energy ULC's Calgary-based oil-trading operation in a move that is expected to mean about 100 job cuts along with the end of a lucrative Alberta government contract, according to sources familiar with the situation.

One source said the cuts are in addition to 400 announced last week at Nexen's North American and North Sea production businesses as the company copes with the collapse in crude prices. A Nexen spokeswoman was not immediately available to provide details or give the rationale for the oil-trading move.

The layoffs are among thousands to hit the Canadian oil patch recently as crude prices slumped to below $50 (U.S.) a barrel from twice that much nine months ago. State-run CNOOC acquired Nexen in late 2012 following a lengthy and contentious review by Ottawa, which ended with new restrictions on oil sands acquisitions by foreign state-owned enterprises.

CNOOC's decision to shut trading came as a surprise to staff at the operation, which had been seen as a profitable division within Nexen amid the downturn because returns are derived more from taking advantage of price spreads than the value of the commodity itself.

"They're shutting it down completely – no trading, no lease third-party business," said the source, an industry professional who spoke on condition of anonymity. The source said the trading operation, which currently employs about 150 people, will be closed over the next one to six months.

"I think the appetite is probably for sooner than later."

Nexen is one of two private sector companies that market 90 per cent of the crude oil that the Alberta government takes in in lieu of cash royalties from energy producers. The total volume sold by Nexen, Royal Dutch Shell's trading arm and the Alberta Petroleum Marketing Commission (APMC) itself is about 70,000 barrels a day of conventional oil, according to the agency's website.

That contract was up for renewal, and Nexen had been expected to win another stint as marketer for the commission. However, a source said, the company has pulled its contract bid in light of the decision to shut the operation.

The Alberta government was surprised when Nexen withdrew its bid last week, spokesman Chris Bourdeau said. "They have been a Crown agent since 2007 and the relationship has been good."

The company's withdrawal will not have a negative impact on the APMC or the government's royalty revenues, Mr. Bourdeau said. There are other bidders with the capability to handle the business and new agents for the commission will be announced soon, he added.

Now, traders at the unit are said to be busy winding down operations by closing out their trade positions.

Competitors said the loss of a rival is negative for the Canadian energy trading business, which thrives on an active market with numerous buyers and sellers to make frequent trades and establish fair prices, known as liquidity.

Another trader said, "There will likely be some liquidity impact, but the Crown [government] barrels will still be out there, just marketed by someone else."

Last week, Nexen said it was cutting 340 jobs in North America and 60 in North Sea offshore operations, representing 13 per cent of its global work force. The staff reductions came as other oil patch players, including Talisman Energy Inc. and ConocoPhillips Co.'s Canadian unit, announced similar-sized cuts, many of them white-collar positions.

Analysts have said more layoffs are likely with little to suggest that crude prices could strengthen in the coming months without big cuts in output from members of the Organization of the Petroleum Exporting Countries or other major oil-producing nations. 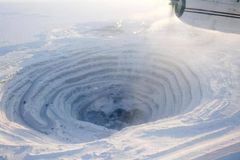