The rout in commodities ranging from gold to oil is showing no sign of letup, taking the Canadian dollar down to its lowest level in more than a decade.

The widespread slide is tied to factors that include speculation interest rates are about to rise in the United States, and concerns that strong oil and iron ore companies will continue to increase production in hopes of squeezing their less-efficient counterparts out of the market.

This comes as the prospect for global economic growth remains weak and as the World Bank on Wednesday released ugly predictions for commodity prices.

Gold fell for its 10th consecutive day – its longest slip since 1996. The commodity hit a five-year low on Monday. The loonie was down 0.50 of a cent (U.S.) at 76.71 cents. That's the lowest level since September, 2004, and oil prices retreated below $50. The S&P/TSX composite index dropped 69 points on Wednesday, bringing the loss to 2.3 per cent so far this week.

Patricia Mohr, a commodity markets specialist at the Bank of Nova Scotia, notes this is the fourth straight year in which global growth has hovered around 3 per cent.

"That doesn't sound bad, but it is quite lacklustre," she said. This comes, she notes, as large commodity producers try to put their competitors out of business at the expense of their own profit margins.

BHP Billiton, for example, on Wednesday said it would cut its production target for coal, petroleum and copper. It left its iron ore goals unchanged even though the commodity is trading down 27 per cent this year. The World Bank, in its commodity markets outlook, said iron ore will be worth 40 per less this year compared with last year.

"All main commodity price indices are expected to decline in 2015, mainly due to abundant supplies, and in the case of industrial commodities, weak demand," the report said.

Commodities are trading at their lowest in 12 years after a decade-long bull market fuelled by growth in developing nations such as China and India. The bank said metals and coal consumption in particular may slow in China as the nation shifts to a more services-oriented economy and enacts policies to curb pollution.

Interest rates in the United States are an influential driver of global commodity prices, Ms. Mohr said. The Federal Reserve Chair, Janet Yellen, last week said she expects rates to rise. This would make the U.S. dollar more powerful but hurt commodity prices, which are generally in U.S. dollars.

"It is deflationary. It becomes increasingly difficult for commodity producers to move prices up because they are already moving up in U.S. dollars in local currency terms," she said.

Oil, a key factor determining the health of the Canadian economy, closed at $49.13 a barrel, down $1.73, on Wednesday. It was dragged down by the unexpected increase in the amount of crude the United States has in storage: 463.9 million barrels of commercial crude oil for the week ending July 17, according to data the U.S. Energy Information Administration released on Wednesday. That is up 2.5 million barrels compared with the previous week.

"U.S. crude oil inventories remain near levels not seen for this time of year in at least the last 80 years," the agency said.

Daniel Flynn, a trader and analyst at the Price Futures Group in Chicago, attributes the ongoing fallout of commodities to a large sale order for gold futures – about 900,000 contracts – on Sunday night. This drove down gold prices and spilled over into other commodities as traders faced margin calls.

"That really pressured the metals coming into the week," Mr. Flynn said. "It is fear [and] margin calls. The markets are based on fear and greed. The market tends to overreact."With reports from Bloomberg and The Canadian Press

This measure of copper is another bad omen for the commodities meltdown
July 22, 2015 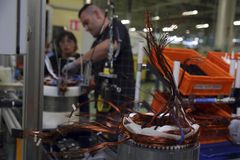