Debt reduction is a top concern for a merged Enbridge Inc. and Spectra Energy Corp.

The $37-billion deal, announced Tuesday, will bring together an impressive grouping of oil and gas pipeline, midstream, utility and renewable assets. But it will also leave debt levels uncomfortably high, at least initially.

Moody's Investors Service Inc. is sticking to its negative outlook for Enbridge Inc. until the ratings agency sees the massive deal close, and the new, combined entity's debt paid down.

"The transaction is credit-positive for Enbridge because Spectra brings increased size and scale, and helps create the largest midstream company in North America with a more diverse asset portfolio," Gavin MacFarlane, Moody's vice-president and senior credit officer, said in a note.

"But the company's combined leverage remains elevated. We are maintaining a negative rating outlook for Enbridge until we see the company execute the transaction, the large capital program in 2017, and deleveraging plans."

Enbridge said it will take on $22-billion of Spectra debt. Meanwhile, Enbridge's own long-term debt sat at $34.3-billion at the end of June. It adds up to total borrowings of $56.3-billion.

Moody's said Enbridge's ratio of debt to pretax operating earnings was 7.2 times at the end of the second quarter, while Spectra's was about 5.8 times. On a combined basis, their leverage is 6.7 times.

"The negative outlook on Enbridge reflects its high leverage and execution risk associated with its plan to delever in a timely fashion," Moody's said, noting the company could be downgraded if it doesn't shed enough debt by the end of 2017.

Enbridge's friendly takeover of Houston-based Spectra – the largest-ever deal involving a Canadian energy company – will create a diverse energy infrastructure player. The deal, which will see the Enbridge name retained and headquarters kept in Calgary, is expected to close early next year. It is still subject to shareholder and regulatory approvals.

Moody's noted the acquisition is being financed with equity, not debt. And both companies have relatively low business risk, with little exposure to commodity prices or sales volumes. Indeed, the revenues are mostly contracted or regulated.

DBRS Ltd. placed all of Enbridge's and Spectra's debt under review. It noted the combined company's target will be to reduce debt to five times pretax earnings. In the near term, its ratings will be pressured with the initial debt level amid capital spending plans of $12.9-billion next year, DBRS said.

The companies said they plan to sell $2-billion worth of non-core assets over the first year, and had identified up to $6-billion more that the new entity could auction off, a projection the rating agency favours. Enbridge has also been active raising cash by "dropping down" pipeline and other assets into affiliated vehicles, such as Enbridge Income Fund. Enbridge executives held out the prospect of future such transactions in a conference call Tuesday to discuss the deal.

There could also be consolidation of the companies' U.S. master limited partnerships, said Dirk Lever, analyst at AltaCorp Capital. "There may be some rationalization, but they'll look at that down the road," he said.

Peters & Co. Ltd. said debt and the the organizational structure will remain a top concerns among investors, as has been the case with Enbridge.

Enbridge has been a stalwart of Canadian blue-chip companies, but earlier this year, it pared back its dividend-increase forecast, at least in part because of regulatory delays for proposed pipeline projects. 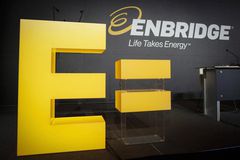 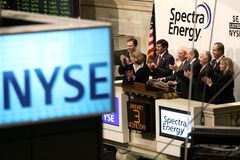