Enbridge Inc. chief executive Al Monaco says his company is aiming to invest $1-billion a year in natural gas and renewable energy projects, as it looks to rebalance its earnings away from oil over the longer term and take advantage of the global push to a lower-carbon economy.

Mr. Monaco – whose company is vilified by activists over its oil-sands pipeline projects – will take centre stage this week at the GLOBE conference on sustainable business in Vancouver where Enbridge will promote its investments in natural gas, energy efficiency and wind power. The CEO provoked headlines a week ago when he told analysts that company will shift its growth emphasis away from the oil sands.

"We have to look at what the fundamentals are telling us," he said in an interview during a visit to Ottawa on Friday. "And the fundamentals are telling us that natural gas and power generation particularly for renewables are going to be a significant element of growth both in North America and globally. So from a strategic perspective, we think a greater level of balance makes sense as we move forward."

But he said the company will take a measured approach and is determined not to overpay for acquisitions for the sake of achieving that rebalancing.

Mr. Monaco is eager to paint Enbridge as a leader in the transition to a cleaner-energy economy. He will be joined on stage at the GLOBE conference by Suncor Energy Inc.'s chief executive Steve Williams, as the industry seeks to highlight Alberta's new climate strategy. The Alberta plan includes a proposed cap on greenhouse gas oil sands which the provincial government and producers hope lessens the opposition to the sector, though many activists continue to argue Canada's climate commitments should preclude oil-sands expansion and new pipelines.

To be clear, the Enbridge chief isn't giving up on the growth potential in oil pipelines. But the company's major oil-sands-related projects are encountering tough regulatory and political hurdles.

The proposed Northern Gateway from Alberta to Kitimat, B.C., faces a wall of opposition from coastal First Nations, an unsupportive provincial government, and a proposed tanker ban by Ottawa. Enbridge's planned $7.5-billion expansion of its Line 3 pipeline to the U.S. – the largest project in the company's history – is running into stiff opposition and delays during regulatory hearings in Minnesota, and a legal challenge to determine whether it requires a presidential permit of the kind that sunk TransCanada Corp.'s proposed Keystone XL project.

Mr. Monaco professed confidence Line 3 will be approved but shifted $5-billion in planned capital spending by a year or two to 2019 while it awaits approvals. And he expects growth in the oil sands to slow markedly after 2020, until the industry sees some price stability that offers reasonable returns and justifies investment decisions on new production.

Over the medium term, the company is looking to return to a more balanced revenue picture, in which oil pipelines would account for "closer to" 50 per cent of earnings. The liquids pipelines division now contributes 70 per cent of earnings, a figure that would climb to 75 per cent if the proposed major projects get approved.

Enbridge owns Enbridge Gas Distribution, Ontario's largest gas utility, and it invested $5-billion in some 20 renewable power projects since 2002 to become one of Canada's largest renewable energy generators. In November, it invested $760-million for a 24.9 per cent stake in the Rampion wind project in the United Kingdom's offshore and is proceeding with a $200-million wind project in West Virginia.

Enbridge last week announced a $2-billion share issue to finance its capital plan. Mr. Monaco said greater investment in natural gas and renewable power assets won't come at the risk of the company's utility-grade returns and record of increasing its dividend every year. 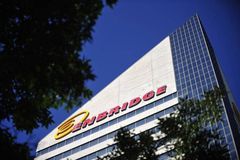 What's behind the rise in short interest on Enbridge shares?
Subscriber content
February 24, 2016