Canadian mining companies have had a rough go in Europe. Clobbered by political indecision and fierce opposition from environmental groups, Gabriel Resources seems on the verge of abandoning its 15-year attempt to open the continent's biggest gold mine, in Romania. Eldorado Gold has been besieged by protests and an arson attack that have slowed, though not killed, its mine development in northern Greece.

Euromax Resources is proving the exception to the rule that no Canadian mining development in Europe shall go unchallenged. The company's shares, which are listed on Toronto's Venture exchange, tripled over a three-day period starting June 5, when it released a pre-feasibility study that, it claimed, amply displayed the "economic robustness" of its Ilovitza gold-copper deposit in southeast Macedonia. The shares last traded at 60 cents; at one point in April, they were under a dime.

The encouraging study means that the $500-million (U.S.) open-pit mine is almost certain to go ahead. "We have the chance to build the first greenfield mine that anyone has seen in the Balkans for 30 years," says Euromax CEO Steve Sharpe.

Even better, the permitting risk, while not absent, seems low. Macedonia is a new country that is working hard to attract foreign investors. To streamline development, it front-end loads the permitting process, that is, government departments and regulators provide permits based on detailed conceptual studies. "You get government buy-in from day one," Mr. Sharpe says, noting that Euromax expects no problems in obtaining the construction permit.

Compare this to Gabriel, which has spent about $550-million on project development and legal work on its proposed Rosia Montana mine, in the Transylvania mountains, with nothing to show for it. Every permit has been challenged by savvy and well-organized local and international environmental groups whose supporters, at times, have included Hungarian billionaire George Soros and actor Vanessa Redgrave. Rosia Montana has emerged as the textbook case on how not to develop a mine. Gabriel is considering an international arbitration case to recoup the lost investment and profits.

Euromax's Macedonia mine is a simple beast, in comparison. While large, it is not so large, like Gabriel's, to emerge as a political lightening rod. "One of the things you learn is that once you say it's the biggest X or biggest Y, you attract a lot of attention," Mr. Sharpe said.

The Euromax mine does not require the relocation of villages and their inhabitants, as Gabriel's does, and its footprint, while relatively large, is nowhere near the size of Gabriel's four-pit, mountain-leveling behemoth.

Euromax plans to build the mine in 2016 and start scraping the ore out of the ground a year later. The company does not plan to hose out new shares to pay for the project. Bank debt, which will probably be guaranteed by the German state, will finance the bulk of the development costs. Germany is involved because the mine concentrate is going to a German-owned smelter in Bulgaria. For investors, the idea is to run the mine effectively as an income trust, with half the free cash flow to be paid out to shareholders in the form of dividends.

Euromax is moving at remarkable speed. The company was formed only two years ago by the former management team of European Goldfields, which was bought that year by Eldorado (Mr. Sharpe was Goldfields' business development boss). Barring a disaster, Euromax will have a working mine in three years. Gabriel must be watching in awe.

Gabriel may seek billions in arbitration over stalled Romanian mine
April 30, 2014 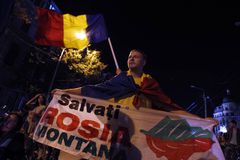 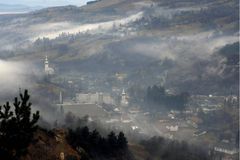 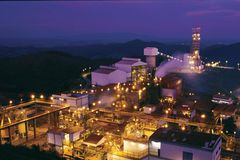