Stornoway Diamond Corp. is selling its first cluster of Quebec gemstones this week, the introductory auction of what it believes will be a strong market for its diamonds in the years ahead as overall industry supply begins to dwindle.

The Longueuil, Que.-based producer will test the value of its initial batch of diamonds on the open market in Antwerp, Belgium, in a multiday sale ending Nov. 23. Stornoway said it will sell about 91,000 carats of gemstones in roughly two dozen lots arranged by size and quality in a tender process organized by diamond broker Bonas Group. The best offer takes each lot.

"We won't try and overthink our marketing," said Matt Manson, Stornoway president and chief executive officer. "We'll be price takers, within reason. If we get a crazy low price for something, we also have the right to not sell."

Stornoway's stones were mined at its new Renard mine in the Otish Mountains, a range of tall hills north of Lac Mistassini in the James Bay region of north-central Quebec. Built with a $946-million financing package secured in 2014, Renard is the province's first diamond mine and a centrepiece in the Quebec government's Plan Nord northern resources development program.

The shipment comes as Stornoway starts ramping up output with a goal of achieving commercial production by year end. The company said it is on track to beat its guidance for full-year carat production, meaning it is producing more diamonds than it thought it would, but at a lower-than-expected initial diamond price because of a higher proportion of small diamonds in the early product mix. Proceeds of the Antwerp sale will be treated as unbudgeted preproduction revenue.

Stornoway's strategy will be to focus on the mining rather than devoting too many resources to sales, Mr. Manson said. He said the company will not be getting into any downstream activities like cutting.

Globally, the diamond industry is defying previous forecasts of a slowdown for the second half of 2016. Prices for rough diamonds, the term for stones sold before they are cut and polished, are recovering following a decision by De Beers and Russia's Alrosa PJSC to cut supply in an effort to boost sales.

Looking further out, Stornoway should benefit from what many market forecasters believe will be a long and steady global drop in diamond production, Mr. Manson said. Several major mines are slated to start closing in 2021 and no new supply is visible on the horizon beyond three operations starting this year, he said.

One wild card that could shake the $75-billion (U.S.) global industry is the rise of synthetic diamonds. Advances in technology have spurred manufacturers to produce significant volumes of gem-quality stones that are indistinguishable from the genuine mined product without sophisticated grading equipment.

The big danger is that traders try to pass off the synthetic diamonds for real ones or mix them in with mined stones, potentially undermining consumer confidence. Big producers like De Beers are spending millions to make synthetic stones themselves to better understand the technology and protect their natural product.

Mr. Manson said he believes as long as it remains possible to discriminate between man-made and natural diamonds, the two can co-exist – synthetics as the cheap option for people looking for simple adornment and mined diamonds for those looking to mark a momentous event in their lives.

"As gemstones, diamonds inherently have a special place," Mr. Manson said. "Women communicate their marital status with that specific object and everybody knows that. If diamonds didn't exist, we'd all have to collectively agree on something else that played that role."

Stornoway released the results of an updated mine plan and mineral reserve estimate earlier this year that highlighted the potential of Renard to become a significant producer of high-value rough diamonds over an initial 14-year mine life. Average diamond production for the mine is forecast at 1.8 million carats per year over the first 10 years of mining, at an average valuation of $155 per carat based on March, 2016, terms. 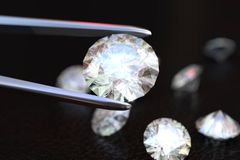