Natural gas fetched nearly as much as a barrel of oil in the U.S. Northeast this week – enough to send more chills up the spines of millions of people already shivering in the grip of bitter cold.

Such lofty prices represented short-term deals done at the peak of demand, when furnaces across New York City were running flat out to cope with the apocalyptic-sounding polar vortex. Only the odd British thermal unit changed hands at $80 (U.S.) or $90, and since then the market has retreated as the weather forecasts have moderated.

But there may be more than just false positives in the gas market this winter.

Signs have been piling up for months that prices may finally be headed for a long-term ascent from the doldrums, where they've been since a deluge of new shale-gas supplies washed in just as industrial demand tanked during the financial crisis.

The energy industry turned its attentions and technology to pumping more oil, making gas production almost a costly inconvenience at times. But this cold winter may be the kicker for a rebound and an injection of some excitement in gas producers again.

In Canadian-dollar terms, spot, or day-ahead, gas at the AECO-C Hub, the underground storage site in southeastern Alberta that's used as a pricing benchmark, hit $4.26 a gigajoule this week, 40 per cent higher than a year ago, and 25-per-cent richer than at the start of the industry's heating season on Nov. 1.

That alone does not spell recovery. A big bump in demand and shipments to frigid places such as Southern Ontario and the U.S. Midwest elevated the price of gas in Alberta, but warmer temperatures will ease demand and short-term pricing. Count on it.

But hold on – check out longer-term fundamentals: Inventories, comfortably above the five-year average just two months ago, are being withdrawn at rates not seen in a good, long time. Land-based rig counts are down across North America, even in major shale plays such as the Marcellus in the U.S. Northeast, which has become a competitor to Alberta. That points to a struggle refilling storage facilities come April.

To put enough rigs in the field to stem declines in gas production – and turn some attention away from oil – the industry needs sustained New York Mercantile Exchange gas prices of the equivalent of $5.15 a gigajoule, according to a new report by RBC Dominion Securities. That would be up from about $4.93 on Wednesday. But even if rigs come back online, there are reasons that suggest the market may absorb new supply.

On average, market players expect a report on Thursday to show a U.S. withdrawal of 150 billion cubic feet last week, up from 97 billion cubic feet the week before, according to a Reuters survey. The cut-off for the data is Friday, so the record demand of the past several days won't be tallied until next week, and it could break records. In Canada, stockpiles in the East, especially, are being tapped at a faster rate than expected.

Meanwhile, recent stats have shown industrial activity picking up in Canada and the United States, leading Calgary-based forecaster Martin King of FirstEnergy Capital Corp. to suggest that gas demand for such things as fertilizers, plastics and on-site power generation could keep gaining steadily following years in the dumps.

"Between the lower inventories, what I think will be a mediocre supply-growth picture for the U.S. this year, and increases in structural demand, it's all kind of lining up right now," Mr. King said. "Prices may be a little bit stronger than what we forecast too."

There are some other factors at play, according to Mr. King. They include increasing U.S. exports to Mexico, and new demand from liquefied natural gas shipments on the U.S. Gulf Coast within the next two years. Together, they add up to about 1.5 billion cubic feet a day headed outside the U.S. By the end of the decade, if all goes according to plan, LNG exports would begin off the B.C. coast as well.

Now, before rushing to take out a second mortgage on the house to scoop up gas shares, don't forget that the energy industry's been wildly successful at drilling and fracking the daylights out of strong prices to create gluts and drive markets back down.

Still, this time the demand outlook's decidedly brighter. Not only would the market withstand some higher production, it might actually need it. 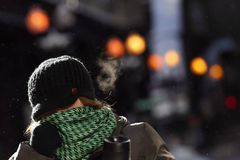