Hyundai Corp. is looking to revive the dream of a fleet of hydrogen-fuelled vehicles driving on Canadian highways as it becomes the first auto manufacturer to launch in Canada a fuel cell version of an existing car model.

Hyundai will announce Wednesday that it is offering three-year leases for the Tucson FCEV to drivers in British Columbia's Lower Mainland, one of the few areas in the country that have hydrogen fuelling stations that were put in place as B.C. sought to demonstrate the fuel cell hydrogen technology during the 2010 Winter Olympics.

"We believe Hyundai has passed the tipping point in fuel cell technology development and that it's ready to be driven by customers interested in pioneering a zero-emissions automotive future," Don Romano, president of Hyundai Auto Canada Corp., said in an interview. "It is a new game; it is a new future."

But to achieve broader market appeal for the hydrogen vehicles, Hyundai is urging governments and industry to work together to build a network of hydrogen fuelling stations. As with electric vehicles, the industry faces a classic chicken-and-egg situation in which motorists don't want to buy cars that they can't easily refuel, while industry is reluctant to invest in the infrastructure without a critical mass of cars on the road.

The fuel cell industry has been struggling to break into the passenger vehicle market for decades. In Canada, Ballard Power Systems Inc. developed fuel cell applications for stationary power systems, forklifts and buses, but it failed to break through in the passenger vehicle market despite high-profile alliances with Ford Motor Co. and Daimler AG.

Advances in fuel cell technology and increasing demand from governments for zero-emission vehicles to combat climate change have breathed new life into the fuel-cell market, with the South Korean auto maker now in a race with Japan's Toyota Motor Corp. to establish leadership in the market.

Toyota unveiled its Mirai fuel cell car at the Los Angeles Auto Show earlier this month. Toyota Canada Inc. is not prepared to say when the car will be available in Canada.

In such vehicles, hydrogen is stored on board – like gasoline in a tank – and then transformed into electricity by the fuel cell to run an electric motor. The only byproduct is water vapour, resulting in zero emissions from the tailpipe. However, it requires electricity to produce hydrogen, so emissions can result from that process depending on the source of the power.

Last year, Hyundai became the first auto manufacturer to mass-produce fuel cell vehicles, and has been introducing them in its home market, as well as in California – where the state mandates the sale of zero-emission vehicles – and in several European countries.

Mr. Romano said the fuel cell vehicles have clear advantages over electric cars, such as the Tesla or Chevrolet Volt, because it has greater range and can be refuelled in five minutes. Electric vehicle makers are still working to develop batteries that can provide that kind of range and convenience.

But the charging infrastructure for electric vehicles is much better developed than it is for fuel-cell-powered cars.

Tesla and Quebec City-based Groupe Germain Hospitalité expanded the network further Tuesday, announcing that the chain of 10 hotels in Canada will add Tesla's private charging program to its network of existing chargers.

"We were the first hotel in the country with geothermal technology to heat our hotels," said Mr. Germain, who said he bought a Tesla last year and came close to running out of juice a few times before charging stations became much more common.

The Tesla system will enable hotel guests to recharge their vehicles in four hours, compared with as long as 12 hours at other charges, he said.

While the public continues to have safety concerns with the hydrogen-fuelled cars, the Hyundai executive said they have been crash tested and certified, and that equipping a vehicle with a hydrogen tank is no more dangerous that gasoline.

With files from reporter Greg Keenan in Toronto 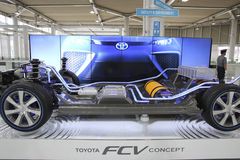 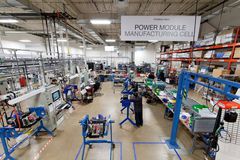 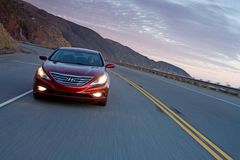