Is Glencore CEO Ivan Glasenberg about to strike again?

The great white shark of the global commodities industry is laying the groundwork for a blockbuster deal that would see Glencore Xstrata PLC merge with Rio Tinto Group to create a mining giant that would displace BHP Billiton Ltd. as the world's top mining company, Bloomberg reported on Monday.

A Glencore spokesman in Switzerland would not confirm or deny that Glencore, the world's biggest trader of commodities, from coal to grain, is contemplating a merger with Rio Tinto. "No comment," he said.

Rio Tinto said late Tuesday that it had rejected a merger approach from its smaller rival in August, finally responding to a string of media reports over the past month that have said Glencore wanted to merge with Rio. It also said there had been no further contact between the companies on a merger.

"The Rio Tinto board, after consultation with its financial and legal advisers, concluded unanimously that a combination was not in the best interests of Rio Tinto's shareholders," Rio Tinto said in a statement to the Australian stock exchange.

The American depository receipts (ADRs) of Rio shot up 18 per cent after the Bloomberg story appeared, then slipped back for an 8 per cent gain. On the London exchange, Rio shares rose 1.6 per cent, giving it a market value of £56.3-billion.

While Bloomberg said that no talks are under way between the two companies, it is an open secret that Mr. Glasenberg, a multibillionaire South African, has every intention of using mergers and takeovers to greatly extend Glencore's reach along the commodities value chain. Glencore's strategy is to control the mines, the warehouses, the ports, the ships and the trading networks that produce and distribute commodities.

The question is whether Rio's management and shareholders would endorse a deal that could come with no takeover premium. Some analysts think not.

In a note published late Monday, Jake Greenberg, global natural resources specialist at Bank of America Merrill Lynch, said "Nil premium hostile mergers don't work. The mining sector learned this lesson when Xstrata went after Anglo. Investors will demand a premium and Glencore will not be interested in offering one."

He was referring to Xstrata's attempt, made in 2009 with Glencore's approval, to buy Anglo American, one of the world's Big Five mining companies. At the time, Glencore owned 34 per cent of Xstrata, giving it effective control, and was happy to use it as a stalking horse. The attempt was rejected by Anglo's then-CEO, Cynthia Carroll, and Glencore and Xstrata never came back.

Mr. Greenberg also noted that a corruption probe into Aluminum Corp. of China (Chinalco), which owns 9.8 per cent of Rio, would no doubt prevent Rio from negotiating a deal until the air is cleared. Mr. Greenberg doubts Rio, in any event, would endorse a merger with a company with sizeable assets in the Democratic Republic of Congo and Colombia. Rio shareholders, he said, "are happy with their OECD exposure."

Glencore's biggest move into mining came in 2012, when it announced the $29-billion (U.S.) purchase of the 66 per cent of Xstrata it did not already own.

More recently, Mr. Glasenberg and Peter Munk, the founder and former chairman of Barrick Gold, talked about merging Glencore and Barrick. If that had happened, the world's biggest gold mining company and the world's biggest commodities trader would have formed a global resources giant to rival BHP Billiton and Rio Tinto. "It would have been a perfect combination," Mr. Munk told The Globe and Mail in an interview in March.

The idea never flew, in good part because gold is the one commodity that Glencore does not trade. 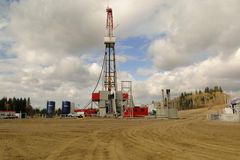