Now that the campaigning is over, the energy industry says it's time to get down to the brass tacks in talks for new oil pipelines through British Columbia.

The surprise win by the Liberals on Tuesday is a relief for energy companies. Premier Christy Clark is an unabashed booster of liquefied natural gas exports projects, still years away, that will cost billions to construct. She has said British Columbians could benefit from a natural gas windfall in line with what oil has done for Alberta.

But the Liberal victory is still a relative wild card for pipeline companies. While Ms. Clark hasn't ruled out specific pipeline projects as her NDP competitor did, she has picked up on British Columbians' concern about increasing the barrels of bitumen crossing the province and being loaded into tankers on the West Coast. She has set what she says are immovable conditions for heavy oil to be transported across the province, including First Nations consultation and treaty rights, world-leading marine oil spill prevention and a requirement that B.C. receive "its fair share of the fiscal and economic benefits" of any project.

The energy industry says it can work with that.

"The five conditions are very clear. We think those are useful. We think they set the stage for focused discussions amongst federal and provincial governments," said Geoff Morrison, manager of B.C. operations for the Canadian Association of Petroleum Producers. "There's definitely a greater appetite, I think, amongst this government to explore ways to make it work, where the alternative [the NDP] was pretty clear about their desires."

B.C. NDP Leader Adrian Dix in his campaign said the province would conduct its own inquiry of the Northern Gateway pipeline proposal despite the National Energy Board review process. Now the energy industry is hoping the Liberals' new mandate, won on a campaign of putting jobs and the economy first, means real progress can be made.

At stake is the B.C. government's position on Enbridge Inc.'s proposed Northern Gateway pipeline between Bruderheim, Alta., and Kitimat, B.C., and Kinder Morgan Inc.'s plans to twin its Trans Mountain pipeline, which runs from just outside of Edmonton to Burnaby, B.C., and which will increase capacity to 890,000 barrels a day from the current 300,000.

Those projects, along with TransCanada Inc.'s proposed Keystone XL pipeline from Alberta to the U.S. Gulf Coast, are considered lifelines for neighbouring Alberta's oil industry, which needs to find new markets for its fast-rising oil sands crude production. Ms. Clark's victory, aided by a number of prominent federal Conservatives, comes the same week that Prime Minister Stephen Harper will travel to New York City to speak at the influential Council on Foreign Relations think tank, where his government's push for approval of the controversial Keystone XL pipeline project is sure to be front and centre.

Janet Holder, leader of the Northern Gateway project team for Enbridge, said all the company has heard from the B.C. Liberals is the original five terms, and "we believe that we can meet those conditions."

If the Northern Gateway project wins federal approval but does not meet B.C.'s demands, Ms. Clark has said in the past that her government could still block construction by denying permits, or by directing B.C. Hydro to refuse to provide the pipeline with power.

With oil sands production projected to double in less than a decade, there are concerns the output could soon outstrip transport capacity. Ottawa and the Alberta government have both been pushing for additional pipelines, including projects through the United States such as Keystone XL, along with those that would cross B.C. to the West Coast and onwards to foreign markets.

Alberta Premier Alison Redford, who has had a number of "frosty" talks with Ms. Clark on the issue, has argued that access to foreign markets for Canada's oil and gas is a national concern. In the wee hours following Ms. Clark's victory, Ms. Redford released a statement saying: "I know we can do more together." 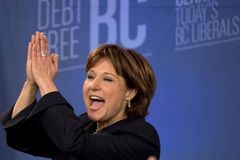 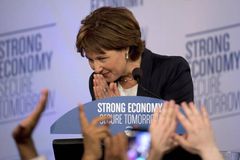