The Ohio-based mining giant is preparing to shut down its money-losing Bloom Lake iron ore mine in northeastern Quebec amid rock-bottom prices for the mineral and high operating costs. It has already closed a Labrador iron ore property at Wabush and said it is looking to sell its chromite deposits in northern Ontario's Ring of Fire.

Cliffs has spent hundreds of millions of dollars developing the high-potential Ring of Fire deposit and the existing Lake Bloom operations, but has run into a series of roadblocks, including a five-year low for iron ore prices, slumping Chinese demand and major delays in getting agreements with Ontario and First Nations over essential infrastructure for the Ring of Fire.

A shutdown of Bloom Lake would be a major blow to the local economy and to the provincial government's multibillion-dollar Plan Nord economic development strategy pinned on natural resources extraction north of the 49th parallel.

Likewise, the Ontario government had made the Ring of Fire the centrepiece of its ambitious development plans for the mineral-rich region about 500 kilometres northeast of Thunder Bay in the James Bay Lowlands. And Cliffs had been the leading mining player in that plan.

Cliffs chief executive officer Lourenco Goncalves said in an interview that Ring of Fire no longer fits the company's strategy of returning to its roots selling iron ore from its mines in Michigan and Minnesota to U.S. buyers.

And he said he has run out of time at Bloom Lake because one of three potential partners in a $1.2-billion (U.S.) expansion plan said it couldn't make a decision within Cliffs's tight time frame.

About the Ring of Fire, Mr. Goncalves said: "I did not buy that area and I would have never done that in the first place. Someone that was at Cliffs did it before me."

At any rate, there is "no hope" Ring of Fire will be developed in the next 50 years because of the lack of infrastructure and lack of buyers for the valuable chromite deposit, he said. Chromite is used to harden steel while iron ore is a key material in steel making.

Mr. Goncalves took over at Cliffs in August, one month after activist investor Casablanca Capital LLC won a proxy fight to replace the company's board.

Ongoing feuding between the federal and Ontario government over infrastructure in the Ring of Fire is no longer an issue, he said.

"It was a factor for Cliffs prior to my arrival. They acquired it in the belief they would be able to have infrastructure."

Cliffs said on Wednesday it is "pursuing exit options" for its Eastern Canadian iron ore operations which could result in the closing of Bloom Lake.

Closing down Lake Bloom would mean the immediate loss of about 500 jobs at the site and hurt suppliers serving the mine from Sept-Îles, Que., the Lower North Shore port city. The union representing workers called the announcement "a regional economic tragedy."

The government has a more nuanced view, saying Wednesday that it is taking a long-term perspective of development in the north that goes beyond the effects of any one commodities cycle.

It would cost between $650-million and $700-million over the next five years to close the Lake Bloom mine, Cliffs said.

The biggest part of the shutdown cost is $450-million over three years that must be paid to cover railroad transport contracts, Mr. Goncalves said. 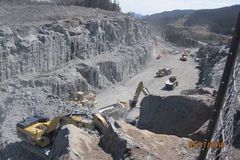 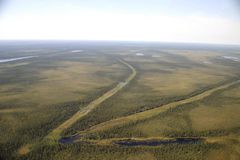