So much for the lentil shortage.

Prices for a food staple of vegetarians across the globe are plunging from record highs in April after Canada, the world's top exporter, began its largest harvest ever and output rose in the United States and India, the biggest consumer. Supplies are increasing for other so-called pulse crops, including chickpeas and dried beans, signalling discounts from costs that had skyrocketed.

"Buyers will look to renegotiate contracts," said Colin Topham, managing director in Vancouver for Agrocorp International, an agricultural trading company based in Singapore. "In rare circumstances, you'll get defaults where they just simply won't take the goods."

Expanding supplies may cut costs for food makers including General Mills Inc. that have been adding protein-rich legumes to breakfast cereals, energy bars and salty snacks. It's also good news for India, where pulses are eaten at almost every meal and a quarter of supply is imported. Prices began soaring in 2014 after rains damaged Canada's harvest and India's weak monsoon reduced domestic output. The rally encouraged farmers in North America to plant more.

Canada will see its lentil production jump 36 per cent this year to a record 3.2 million tonnes, while pea output climbs 44 per cent to an all-time high of 4.6 million tonnes, the government estimates. In 2014, the lentil crop shrank 12 per cent.

In the United States, growers expanded the area planted to lentils by 89 per cent this year to a record 930,000 acres, much of that coming at the expense of land previously used for wheat, U.S. Department of Agriculture data show. Production will more than double to about 623,000 tonnes, from 239,515 tonnes in 2015, said Tim McGreevy, the chief executive officer of The U.S. Dry Pea & Lentil Council in Moscow, Idaho.

"There's quite a bit higher percentage of selling going on than we've seen historically," Mr. McGreevy said. "A lot of that is because they can't make any money on their cereal grains. They're holding on to their cereals, and they're selling their pulses."

Rising supplies have sent prices sinking. Top-quality laird lentils tumbled 34 per cent to 52.85 cents a pound in Saskatchewan as of Oct. 19, down from 80 cents in April, according to Brian Clancey, president and senior market analyst at Vancouver-based Stat Communications Ltd. A wholesale price index for pulses in India fell 5.4 per cent last month, the most in six years, after touching a record high in July, according to the Press Information Bureau of India. Lentils, chickpeas, black grams and pigeon pea are a staple for most of India's 1.3 billion people, and demand has been growing. The legumes are often cooked with curry spices, sauces or butter and eaten at most meals with rice and Indian flat bread.

As recently as last month, the government was expecting record production of food grain this year after timely monsoon rain encouraged farmers to plant rice, corn and pulses across a wider area. In the previous season, the pulse harvest dropped about 4.1 per cent to 16.5 million tonnes, forcing the country to import 5.79 million tons to meet domestic demand, Agriculture Ministry data show.

In the U.S., the price of spot richlea lentils in early October was about where it was a year earlier at 30 cents (U.S.) a pound, but down from a peak of 52 cents earlier in 2016, said Justin Flaten, president of JM Grain in Great Falls, Mont.

"All the information we're getting from customers is that they'll uphold their contracts," said Mr. Flaten, whose company sells to countries including India and Sri Lanka. "We're really counting on our customers to fulfill their contracts."

Without futures markets for pulses, buyers have fewer ways to hedge price risk, which means there may be more pressure this year to renegotiate contracts signed when the crop value was higher, according to Mr. Topham at Agrocorp.

"The prices went up so high because we had very tight stocks with extremely strong Indian demand," said Murad Al-Katib, chief executive officer of Saskatchewan-based AGT Food and Ingredients, the world's largest exporter of peas and other pulses. "You go from historically high prices to normal to average prices and you have an adjustment period."

Turkey and India – the two biggest lentil buyers – have increased their consumption, and China has developed a market around extracting the fibre and starches from the dried peas to use in food products, Mr. Topham said. 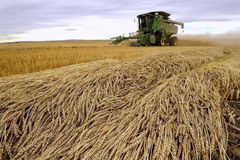 Demand from India spurs record lentil seeding in Canada
May 16, 2018