A sudden rebound in mining acquisitions signals a return of confidence in the industry after weeks of uncertainty and volatile prices that froze deal activity in the sector.

As commodity prices begin to bounce back from a recent fall, miners are betting once again on strong and steady demand from fast-growing nations such as China, India and Brazil to prevent another severe global economic downturn.

The positive outlook driving these new deals comes despite worries that inflation and debt problems around the world will weigh on the economy and metal prices down the road. Stock markets dropped sharply Monday on renewed concerns about solving Europe's debt crisis.

"The metals cycle is not over," said Frank McAllister, Stillwater's chief executive officer, adding that "we will yet see additional upside in the marketplace."

There were also a handful of smaller deals in the gold and uranium industries, while giant miner Vale SA said it bowed out of the bidding for Metorex Ltd., which owns copper and cobalt mines in Africa. That leaves China's Jinchuan Group Co. as the front-runner to acquire the company with its $1.36-billion bid.

The new deals are being generated as commodity prices begin to climb up again. Prices had slipped from record levels reached earlier this year as concerns mount that China, the world's largest consumer of commodities, will need to take tougher measures to curb growth in order to tame inflation and prevent its economy from overheating.

As a result, many mining stocks have lost value as merger speculation waned. But metal prices started to regain ground in recent days, due in part to labour disruptions at various mines worldwide, including a 24-hour strike at the world's largest copper producer, Chile's Codelco. Some investors are also slowly wading back into the market, which is helping to boost prices.

For instance, copper, considered an economic indicator because of its uses in a wide range of sectors, is now trading around $4.35 a pound, after falling to about $4 in May. The metal hit a record $4.62 in February. Nickel, zinc and lead are also up in recent weeks.

The spot price of coal has also levelled off to about $308 a tonne, after reaching $388 in January, around the time flooding halted production at several mines in Australia.

"It definitely signals that M&A is not over," said BMO Nesbitt Burns coal analyst Meredith Bandy.

The new coal deal in particular demonstrates the current scarcity for the product, and the goal of steel makers such as ArcelorMittal to secure their own supply. Steel makers are looking to buy more coal to rely less on sales from big players such as BHP Billiton Ltd., Vale and Rio Tinto PLC.

As for metals such as copper and gold, miners are scrambling to secure what's left of the world's shrinking resources. The last major metals deal was Barrick Gold Corp.'s $7.3-billion (Canadian) offer for Equinox Minerals Ltd. The bold move triggered concern among Barrick shareholders that the world's largest bullion producer was paying a rich price and straying into copper.

Since that agreement was made in April, miners have shown a hesitancy to strike new deals.

"There has been a lull," Stillwater's Mr. McAllister said.

The Stillwater bid for Peregrine is a "unique opportunity" for the platinum and palladium company to expand into gold and copper, Mr. McAllister said. Stillwater was compelled to make a move now, knowing other companies were interested in Peregrine's project, which is expected to begin production in 2017.

While miners are relying on China to maintain demand, some analysts caution that growth from the country rapidly expanding its infrastructure base will not be constant.

Capital Economics economists Julian Jessop and Ross Strachan cited recent figures showing Chinese imports of industrial commodities dropped sharply in the second quarter, by 14 per cent, which is more than during the 2008-09 global recession.

"Imports may well rebound in the second half of the year, but the recent weakness is a useful reminder that buoyant Chinese demand should never be taken for granted," the economists said.

Peabody Energy and ArcelorMittal plan to buy Australia's Macarthur Coal, the world's biggest producer of pulverized coal, for $5-billion (U.S.) Monday's offer represents a 40-per-cent premium for Macarthur, and came a day after Australia unveiled a plan to tax carbon emissions from the country's worst polluters, including coal miners.

Peabody shares fell 3.52 per cent Monday on the New York Stock Exchange, while ArcelorMittal's were down 4.39 per cent.

China's Sichuan Hanlong Group made a $154.9-million "highly conditional" bid for Australia's Bannerman Resources Ltd., which has a uranium project in Namibia. The bid is a 59-per cent-premium, but Bannerman accused Sichuan Hanlong of trying to take advantage of recent share price weakness in the wake of Japan's Fukushima nuclear crisis.

Bannerman has been trying to find a joint-venture partner to help finance, develop and operate its 80-per-cent-owned Etango project. Bannerman said it will continue to talk with Hanlong but will also continue discussions with others for a joint venture.

Bannerman's shares closed up 25.64 per cent Monday in Toronto.

Claude Resources Inc. is offering to buy the rest of St. Eugene Mining Corp. it doesn't own for $14.1-million in stock. Claude, which owns about 9.7 per cent of St. Eugene, offered 0.0601 of its shares for every St. Eugene share. The deal is a 47-per-cent premium to Friday's closing price.

Claude said it was "disappointed" by St. Eugene's recent announcement and subsequent suspension of a private placement that would have diluted its stake at a discount. The two companies jointly own a gold project in Saskatchewan.

Claude's stock was down 1.44 per cent Monday on the TSE, while St. Eugene's rose 41.18 per cent on the TSX-Venture exchange.

Trelawney Mining and Exploration Inc. made a stock-swap offer for Augen Gold Corp. While Trelawney said it hasn't been able to negotiate an agreement with Augen's management, shareholders representing 42 per cent of Augen have entered lockup agreements. The offer is 0.066 of a Trelawney share for each Augen share it doesn't already own.

Trelawney's shares closed up 2.46 per cent on the TSX-Venture exchange, while Augen rose 18.52 per cent. 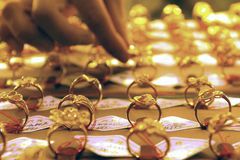