A new deal to sell potash to Chinese buyers at a price dramatically lower than last year is being taken as good news by investors in Canadian potash stocks – a sign of just how far expectations for the sector have fallen.

Belaruskali, the major Belarusian producer, signed a contract to deliver potash to Chinese buyers for $219 (U.S.) a tonne, according to several industry observers on Thursday.

Although the reported price is nearly one-third less than the $315 a tonne that was agreed upon last year, it is better than analysts had feared.

Still, the size of the decline demonstrates how much the market for the crop nutrient has deteriorated in recent months. It also underscores concerns about whether Potash Corp. of Saskatchewan Inc., one of this country's most-followed dividend stocks, will be able to maintain its generous payout.

The Chinese contracts are usually signed at the beginning of each year and set the tone for other negotiations around the globe. The long delay in coming to terms this year demonstrates the size of the potash glut and the reluctance of key buyers to lock themselves into contracts.

Other producers, including Canpotex Ltd., the export consortium of Saskatchewan potash miners, will probably now follow in the footsteps of Belaruskali and settle their contracts at the same $219-a-tonne price, according to Joel Jackson of Bank of Montreal.

The big discount in the Belarusian contract "is not surprising considering the price declines over the past year," and could be considered a slight positive for potash stocks, Mr. Jackson wrote in a note Thursday. He had been expecting a price closer to $210 a tonne.

He noted, however, that no details about the volumes of potash involved have been made public. The ultimate impact could be either positive or negative depending on which producers gain or lose market share.

Other observers also said the price was slightly better than they expected, although not enough by itself to signal a turning point.

"We think the contract settlement will be a near-term catalyst for potash equities as the headline price is likely at the high end of market expectations and could be viewed as setting the stage for a price recovery," Andrew Wong of Royal Bank of Canada wrote Thursday.

"However, we note that the price netback for North American producers would result in below-consensus earnings, and if the contract does not result in improved spot prices through [the third quarter], then the near-term equity gains may be short-lived."

One big factor in determining the outlook for share prices is likely to be producers' attitudes toward dividends.

Potash Corp. cut its payout for the first time earlier this year, but "another dividend cut is prudent to preserve the balance sheet," Jacob Bout of Canadian Imperial Bank of Commerce wrote in a note Thursday.

At its current dividend level, the potash producer will wind up paying out more than it is likely to earn this year and next, he estimated.

Mr. Bout said the bearish outlook for fertilizer producers shows few signs of brightening in the second half of the year. He lowered his price target on Potash Corp. to $18 a share from $20, and on Mosaic Co. to $23 from $24. (All share prices in U.S. dollars.)

Potash Corp. of Saskatoon, Mosaic of Minneapolis and Agrium Inc. of Calgary are the owners of the Canpotex consortium, which sells Saskatchewan potash outside North America.

Shares of all three companies advanced on Thursday.

Mosaic temporarily cuts about 330 jobs at potash mine in Saskatchewan
July 13, 2016 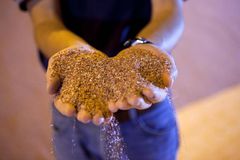