An oil sands pipeline rupture that has coated a large swath of muskeg south of Fort McMurray with bitumen, sand and salty water may have gone undetected by an automated monitoring system for more than two weeks, Nexen executives say.

The exact time and cause of the massive spill is still under investigation. The leak was discovered on July 15 by a worker at the Long Lake oil sands project. On Wednesday, Chinese-owned Nexen Energy ULC revealed the leak may have started as long ago as June 29. The company's computerized monitoring system failed to detect the breach.

Nexen chief executive officer Fang Zhi apologized for the impact of the spill. He said the company is focused on minimizing effects on the environment. "It is very disappointing that this has happened," he said.

The spill is one of the largest in Alberta's recent history and has spewed about 31,500 barrels of bitumen, produced water – a byproduct of oil and gas extraction – and sand onto 16,000 square metres of wilderness.

The incident has prompted opponents of pipeline expansion to press the province's new NDP government to rethink its promotion of pipelines. Alberta and Saskatchewan are seeking support from other premiers to pipe massive volumes of oil sands crude to eastern ports and new markets. Premiers met in St. John's last week to iron out a national energy strategy.

The Nexen spill also threatens to harden opposition to Enbridge Inc.'s Northern Gateway pipeline, which would send as much as 525,000 barrels a day of oil sands crude from Alberta to a proposed supertanker port in Kitimat, B.C. The $7.9-billion proposal has languished for years and faces widespread resistance from environmentalists and coastal aboriginal groups, many of whom fear the consequences of a spill despite repeated industry assurances that pipelines are safe.

On Wednesday, Perry Bellegarde, national chief of the Assembly of First Nations, questioned how a modern pipeline with the latest technology could rupture so easily, suggesting the industry needs to do more to reassure a wary public as it seeks support for much bigger export projects.

"Just look at the Nexen spill," he told reporters after a speech in Calgary. "It wasn't supposed to happen, but it happened."

Nexen's CEO declined to comment on how the rupture of a relatively new pipeline might affect the public's perception of the safety of pipelines.

Nexen, which is owned by state-run CNOOC Ltd. of China, provided the media with a tour of the pipeline site Wednesday. It was the media's first on-the-ground look at the spill and cleanup efforts.

Located about 36 kilometres southeast of Fort McMurray, the spill is in a remote region surrounded by boreal forest, wetlands and industrial activity. The nearest community is Anzac, with a population of almost 800. The hamlet is about 15 km from the spill.

Ron Bailey, Nexen's senior vice-president of Canadian operations, said the company has dug dirt away from the suspected rupture point on the double-walled pipeline. While the outer layer of the underground pipeline is now exposed, investigators have not yet been able to examine the thick inner pipe.

The crack is believed to be smaller than initially thought, Mr. Bailey said. Nexen originally reported it was the size and shape of a fish's mouth.

The pipeline was being used to carry bitumen mixed with sand and produced water to a plant at Long Lake that upgrades the mixture into refinery-ready oil. The pipeline was shut down in early June and cleaned with hot water as part of regular operations, Mr. Bailey said. It was started up again on June 29.

"To the best of our knowledge, things were fine at that point in time," he said.

The spill, he said, may have happened any time between June 29 and July 15. The company is trying to determine if there are other leaks in the pipe. The company does not know why its automated monitoring system failed to detect the leak.

The pipeline and the Kinosis well pad have been shut down, reducing overall output by 9,000 b/d, to 41,000. Production at other well pads at Long Lake will be ramped up to help offset the loss, Mr. Bailey said.

"Our focus is on dealing with the spill itself and the response to that," Mr. Bailey said. "We will be focusing on understanding the root cause of any failure here and the reliabilities of our systems before we would ever start up this system again."

The investigation is expected to take months, he said. It is uncertain how long the cleanup will take.

Colin Woods, a manager of enforcement and surveillance with the Alberta Energy Regulator, was at the spill site Wednesday. Nexen could face a fine, depending on the probe's findings.

"The investigation is ongoing and in its infancy," Mr. Woods said. "We don't want to speculate. We'll take it day by day."

At Long Lake, Nexen injects steam into the ground to melt and thin seams of bitumen too deep to mine. The pipeline was installed in early 2014 and is double-walled so it can be heated to 100 C to prevent the bitumen from hardening.

Cleanup efforts are focusing on containing and removing the produced water. Pits have been created to capture the spilled water, and vacuum trucks are taking away about 200 cubic metres a day from the site, Mr. Bailey said.The bitumen is being allowed to cool and solidify because it can't do further harm to the environment, Mr. Bailey said.

Fences, scarecrows and cannons are being used to deter wildlife from the area. A small lake about 80 metres from the spill is being tested daily and has shown no troubling signs so far.

The spill is almost 60 per cent larger than a 2010 break on an Enbridge pipeline that spewed more than 20,000 barrels of heavy crude into Michigan's Kalamazoo River. The Michigan spill prompted U.S. regulators to sharply criticize safety practices and fixed public attention on the energy sector, which has struggled to build new pipelines.

"It's very alarming that the apparent fail-safe system could have been spilling bitumen into Alberta's environment for over two weeks without anybody noticing," he said.

Ron Hugo, an engineering professor at the University of Calgary, said it is difficult to speculate on what caused the Nexen leak. But he stressed that the ruptured pipe differs from long-haul lines and said there are potential factors caused by the Nexen line's high operating temperature, including thermal contraction and expansion, that could have contributed to the breach.

"This is a very kind of fancy pipeline doing things that normal pipelines don't need to do in terms of the fluid. I wouldn't look at this and say, 'Oh my goodness, we're going to have pipelines rupturing all over the place,'" Prof. Hugo said.

"My one question, though, is why was the fibre-optic cable not able to detect the leak? In order to understand that, they're going to have to dig in deeper and understand what the mechanism of the leak was, how the fluid was coming out." 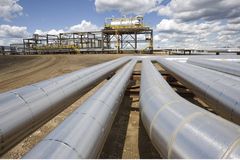 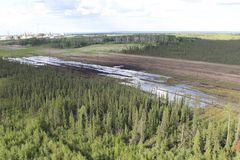