Canada's dominant oil sands producer said OPEC's move to tamp production after two years of pumping flat out shows the cartel has reached a point of maximum pain, setting the stage for an eventual price recovery.

Suncor Energy Inc. chief executive officer Steve Williams said there was an expectation that oil sands output would be the first to succumb when top producer Saudi Arabia launched a battle for market share in 2014, sending prices into a tailspin.

Instead, bitumen production has steadily increased, even as billions of dollars' worth of new developments were shelved as world oil prices plummeted from more than $100 (U.S.) a barrel to as low as $27 in January of this year.

The Organization of Petroleum Exporting Countries on Wednesday surprised markets with an agreement to limit output to the range of 32.5 million to 33 million barrels a day, implying a cut of up to 700,000 barrels from current levels. Prices jumped nearly 6 per cent.

On Thursday, analysts questioned the deal – OPEC's first since 2008 – and said it hinges on details expected to be hammered out at the producing club's next meeting in November.

But it illustrates that production at current levels is not sustainable, Mr. Williams told The Globe and Mail. Meanwhile, major producers have signalled they are in no rush to revive spending after deep cutbacks, suggesting potentially tighter markets ahead, he said in an interview.

"There are some countries in OPEC which are in serious trouble because of low prices," he said. "In an industry sense, on the supply side, investment has been relatively low and there likely is a supply-side issue coming at some stage because of the underinvestment in production."

Oil prices rallied again on Thursday, even as initial euphoria over the pact yielded to questions about whether the fractious cartel is capable of reaching consensus on specifics.

Global benchmark Brent oil for future delivery settled up 72 cents at $49.58 a barrel. U.S. West Texas intermediate crude climbed 78 cents to $47.83. Canadian oil and gas shares rose for a second day, with the S&P/TSX energy index gaining 2.32 per cent in the session.

The thorniest details are unsettled, including which countries would be on the hook for the biggest reductions, when the agreement would take effect and how compliance would be verified, analysts said.

Indeed, disagreements over output quotas is a long-standing bugbear blamed for scuttling earlier attempts by the group to rein in production.

For Canada, it spells little immediate relief from a crippling downturn that has bludgeoned corporate and government finances and led to industry layoffs that number in the tens of thousands.

"In the here and now, nothing's changed for the outlook for prices," said Martin King, an analyst at FirstEnergy Capital Corp. in Calgary.

"It's going to be wait and see. Those who have cut costs and are able to deal with the prices as they see them will continue to do what they're doing. But those that need higher prices may still have to sit and wait," he said.

Several analysts on Thursday pointed to concerns over weak global demand and the potential for U.S. shale production to ramp up as reasons for pessimism.

Meanwhile, oil prices in the $50-to-$60 range are likely to stoke a revival in U.S. shale production, capping further gains, he said.

"Those who think that this is a return to the old OPEC should take more seriously the new circumstances of a world with shale and of lower demand growth," he said in a research note.

Earlier this month, the International Energy Agency said the oil market will show a surplus into next year, owing to an abrupt slowdown in global demand growth and rising supplies.

However, the IEA has also said global investments in new production capacity are expected to fall 24 per cent this year, after dropping by 25 per cent in 2015. 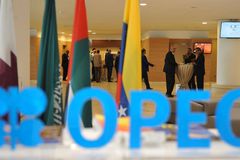