In the icy parking lot of the Wal-Mart in Williston, N.D., the next wave of economic refugees is washing in, counting down the hours until they can turn their back on a past they'd like to forget.

On one chilly day in December, there's the family from North Carolina, which has crammed mom, dad, teenage son and two dogs into an old Winnebago, driving some 3,000 kilometres in hopes of finding work. And there is Eric Larsson, who has come more than 1,000 kilometres from eastern Idaho in a truck loaded with tools, looking for a job after his position vanished – along with his house – three years ago. He's pulling a trailer he just bought so he can have a place to sleep.

These people, and thousands of others whose stories bear a striking similarity, have come to join the frenzy – by plane, by ratty truck, by train. Williston, with a population of around 20,000, was a quiet North Dakota town, surrounded by oil fields that had been in decline for decades. Now, it is the heart of the Bakken, a new oil play that has abruptly woken one of the sleepiest states in the Union, transforming North Dakota into an energy heavyweight.

It has also made Williston, whose surrounding county now has the lowest unemployment rate in the entire country, a new destination for America's jobless, homeless and would-be rich.

There is the Louisiana driller, who brought an entire crew with him after discovering he could boost his pay by $15 an hour by heading north. There is the family who came with an infant and a tent, until someone took pity on them ahead of a major snowstorm. There is the man who sought refuge inside a clothing rack at Wal-Mart, having no other place to stay.

There is Scotty Lail, who watched the bank seize his truck, his fifth-wheel RV trailer and his house after he and 3,500 others were laid off from a Freightliner manufacturing plant. He came to Williston to rebuild, starting with a credit rating that, he hopes, will soon be sufficiently repaired to let him back into home ownership.

"You gotta go to where the money is at," he says.

Even the jet set is seeking a Bakken salvation. Wealthy hedge fund managers and private investors have left New York for Williston in Learjets, drawn by hopes of sinking millions into land that can be developed for a return that seems more certain than anything the financial markets might provide.

Williston is an undeniable boomtown, a modern-day Dawson City or San Francisco – the gold-rush analogies are inevitable. But in many ways, the best comparison lies just over a thousand kilometres north. Williston is America's Fort McMurray – down to many of the incredible details.

In Williston, like Fort Mac a few years ago, fast-food joints post lunch-time hourly rates that are double the minimum wage. McDonald's offers hiring bonuses. Its drive-through – recently widened into two lanes – is so busy, the line of trucks often spills out onto the street. A local gym has lineups 10 deep for its men's showers, as the employed homeless turn wherever they can.

Temporary accommodations have sprung up like weeds. Permits have been issued for 9,400 spots in "man-camps," the local term for mobile-home-style worker camps that have been growing so fast the county issued a six-month moratorium this fall on any additions. Existing hotels are jammed. Two hotels opened this spring. Six new ones are under construction, and oil service companies are booking entire floors before they are even built.

Drive an hour in any direction from Williston, and the bare hills are being cleared to accommodate new hotels, new camps and, often, mini RV camps in the backyard of farm residences. At a going rate of $500 to $1,000 a month just to park and plug in a camper, there's good money to be made for a landowner that doesn't mind a dozen new neighbours.

Thousands of acres of land are being turned into truck stops and apartments and entertainment areas. This year, some 1,000 new housing units are being built. Next year is anyone's guess: it could be 2,000 new units. It could be 4,000, judging by the degree of outside interest.

In the midst of the downpour of activity, Williston's municipal infrastructure is stretched to the point of breaking – its sewage treatment plant, built for 17,000, now services 20,000. The town is hoping to build a new one capable of serving 48,000, but that may not be enough for long. Five years ago, 12,500 people lived here. Five years from now, the town expects it to reach 30,000.

But expectations have a habit of proving conservative. Indeed, some believe Williston's population has already hit 30,000.

"Whatever you thought the number was going to be, double it," says Tom Rolfstad, the town's director of economic development.

The bright flare of optimism hasn't managed to obscure the downside of the boom, however. The oil rush has claimed lives: traffic accidents are routine, as southern drivers, some only recently handed commercial drivers' licences, find themselves attempting to pilot 18-wheelers down icy roads. Some Canadian workers speak with horror about the safety standards at some drilling rigs. In the U.S., many industries – like crane-handlers, divers, paper- and sawmills – have federally mandated health and safety rules. Oil and gas does not.

In 2010, the oil and gas industry in North Dakota had eight fatalities. After one rig exploded, a worker living nearby drove to see what happened. He arrived to find a charred body in the back of a pickup. The ambulance hadn't gotten there by the time he left. Unlike Canada, companies aren't required to have medical services on site.

Still, there is no denying the opportunity in North Dakota, even if the mad rush has brought all sorts of inconvenience. It can take 20 minutes to turn left on some Williston roads because they are jammed with so many trucks. Long restaurants lines have become routine.

And, like many boomtowns, there is a severe shortage of women. That's led to incredible earnings for adult dancers, who can take home $1,000 a night. And it's led to pages of yearning men who have lined up on Internet dating sites hoping for a catch.

"If you're a female, the odds are good," Mr. Rolfstad says. "But the goods are odd."

FROM WHISTLER TO WILLISTON

A little slice of Canadiana has been hauled south of the border to house some of the thousands of homeless workers flocking to Williston, the North Dakota boomtown that is producing gushers of new oil.

During the Vancouver Olympics, officials with Halliburton Co. visited a worker camp set up just outside of Whistler, B.C. The red-and-white building had been built out of 174 shipping containers that snapped together like Lego blocks. It had been purchased by Target Logistics Management LLC, a Boston company tasked with housing Olympic security workers. The building was part of a large accommodation block that was home to some 1,600 people.

Halliburton officials, looking for a way to house its huge influx of North Dakota personnel, liked what they saw and bought it.

Soon after the games ended, Target disassembled the camp and trucked it across the west. It took several months to move to Williston, and opened on Dec. 15, 2010.

Today, it's called the Little Muddy Lodge, named after a nearby river. It has 158 rooms, a full kitchen, gym facilities and TV rooms with pool tables and other entertainment.

Travis Kelley, the Williston and area territory manager with Target, helped run the camp when it was in Whistler, and is doing the same in Williston, under contract to Halliburton. It is a very different kind of place – from world sporting event to oil boom. But, he says, there are striking similarities.

"I'll be honest with you – it's almost the same," he said. "It's the same momentum, the same energy."

But, he says, "the Olympics were a little bit more fun. It was like a big party." 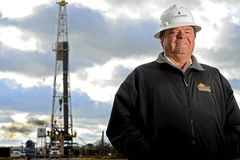 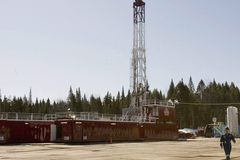