Oil prices keep climbing despite the inability of major crude producers to co-ordinate a freeze on output levels.

U.S. crude jumped by 3.8 per cent to $42.63 (U.S.) a barrel on Wednesday, following data that showed a smaller-than-expected weekly increase in inventories in the United States. It marked the second straight session of prices gains.

Canadian energy shares followed suit, climbing to a five-month high, as investors grow more comfortable that a recovery from the worst downturn in years could be in its early stages. Big gainers included Penn West Petroleum Ltd., which rose 3.8 per cent, Cenovus Energy Inc., up 3.3 per cent, and Athabasca Oil Corp., up 5.8 per cent.

The moves are on the heels of a failure Sunday by the largest producing countries, led by influential OPEC member Saudi Arabia and non-OPEC member Russia, to finalize an agreement that would have committed them to freezing output at January levels. The sticking point at the meeting in Doha proved to be Iran's resistance to capping its production as it seeks to resume exports after years of international sanctions.

Despite the lack of alignment, oil has climbed more than 60 per cent from a February low of just over $26 a barrel. That has fuelled equity markets as well as the Canadian dollar, which fetched 79 cents (U.S.) on Wednesday.

Some of oil's rise was attributed to rumours of another producer meeting being planned before the next scheduled one in June, this time in Russia. However, Russian Energy Minister Alexander Novak denied that there was an agreement for such a gathering, the RIA news agency reported. In addition, Kuwait's output had been disrupted briefly by a strike among oil workers.

Still, several factors are combining to support the crude market, which has been pressured by a global glut for more than a year and a half, said Phil Flynn, an analyst at Price Futures Group in Chicago. They include falling U.S. output, owing to the sharp reduction in capital spending, and rising seasonal demand for gasoline.

Meanwhile, the U.S. Energy Information Administration said inventories rose last week by 2.1 million barrels – which was 300,000 barrels less than expected and one million barrels below the figure reported by the industry the day before. There was a slight reduction in inventories at the Cushing, Okla., storage hub, where earlier this year it was feared stocks would hit capacity.

He cautioned the market could still sell off if there is more evidence that major producers are moving further away from a deal, though he pointed out that only a handful have the wherewithal to boost output quickly, given depleted finances owing to the protracted drop in global oil revenues.

The TSX's oil and gas group finished the day at its highest since early November. Oil-weighted, as opposed to natural-gas-focused, producers that have been dealing with high debt levels were among the top gainers.

Next week, energy companies will begin to report results for the first quarter, and, owing to depressed prices for both oil and gas, many are expected to gush red ink. Investors are clearly looking past the financials of the first three months, said Martin Pelletier, portfolio manager with Trivest Wealth Counsel.

The big question now is whether the recovery will last or repeat its performance of 2015, when oil strengthened for about three months before skidding again at the end of June, he said. Carbon capture and storage to be tested by oil companies in Australia
April 20, 2016 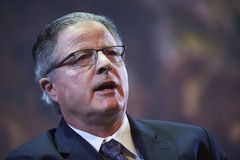