It would be a mistake to shut down the oil sands and move directly to other forms of energy, the head of one of Canada's biggest oil companies says.

Brian Ferguson, chief executive officer of Cenovus Energy Inc., said it is "illogical" for Canada "to completely leapfrog over oil," which is a "fantastic" energy source. Instead, time, effort and money should be used to cut emissions that result from oil production and its use, he said.

Speaking to the Canadian Club in Toronto, Mr. Ferguson said the world still needs oil, and it can be produced in an environmentally friendly way if forces of innovation are harnessed. "We can and we will … reduce those emissions," he said, noting that his company's goal is to produce oil that generates zero emissions in the production process.

Cenovus has also set up a clean-tech fund, based in Vancouver, that focuses on commercializing technologies that reduce emissions in both the production of oil and its end use, he said. "I absolutely believe that hydrocarbons can be part of a low-carbon future."

He said the industry has "basically solved" the environmental problems related to land, water and tailings ponds, and it now focusing on greenhouse gas emissions.

Many environmentalists, on the other hand, have been highly critical of expanded oil sands development and the resulting greenhouse gas emissions, and some would like to see a shift off fossil fuels as soon as possible.

Cenovus has acknowledged that the oil sands have a public-relations problem. It has conducted research that shows most Canadians are not proud of the oil sands and want Canada to significantly reduce the use of oil in the next two decades.

Mr. Ferguson said forecasts show that Canada will continue to need many different forms of energy, including renewables and oil and gas. Technological solutions, such as carbon capture, can address emissions from both production and consumption, he said. "We will find solutions. I absolutely believe that."

Cenovus was hit hard by the drop in oil prices, and has cut its dividend and its capital spending budget, while laying off about 1,600 workers. It has also put expansion of some of its existing oil sands projects on hold, and curtailed conventional drilling in Alberta and Saskatchewan. Mr. Ferguson said he expects oil prices – now around $50 (U.S.) a barrel – to be volatile for some time, perhaps swinging between $35 to $65 over a 12-month period.

Mr. Ferguson has been a strong promoter of new pipeline capacity to get Alberta oil to foreign markets, particularly the Trans Mountain, Energy East and Keystone XL projects. He said he has talked to Prime Minister Justin Trudeau, as well as the ministers of the environment, finance and natural resources, about getting Alberta oil to new markets. They recognize that the environment and the Alberta economy are "two sides of the same coin, that we can absolutely develop these resources that we have in a manner than meets all of the best and highest standards in the world," he said.

Mr. Ferguson has tried to build bridges with the environmental community and has supported the Alberta government's moves to address climate change through a carbon tax and emission cap. He was one of a group of oil executives who appeared on stage with NDP Premier Rachel Notley last November when she announced the province's carbon tax, coal-fired power phase-out, emission cap and promotion of renewable energy.

But Mr. Ferguson would not comment on the Ontario government's sweeping climate-change plan, which includes a big shift to electric vehicles and significant reductions in the use of natural gas.

Oil sands found to be a leading source of air pollution in North America
May 25, 2016 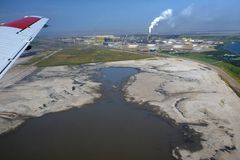 Opinion
Green energy goals have to account for economic realities
May 27, 2016 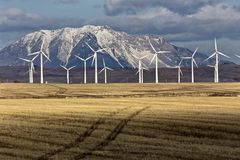 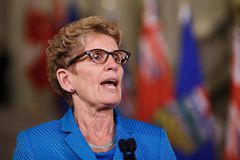