As Canada's oil sands companies work to head off another looming labour crunch, some have begun looking at moving huge numbers of employees out of Fort McMurray, Alta. - and possibly, in the future, to India.

Several oil sands firms have started discussions with management-consulting and outsourcing firm Accenture, which has completed a broad labour analysis that shows that 10,000 to 15,000 jobs could be uprooted from northeastern Alberta.

And thousands of those positions could eventually be sent to overseas centres like Bangalore or Chennai, says Michael Denham, managing director of Accenture's management-consulting services in Canada.

Mr. Denham has proposed radical changes to the way the oil sands are run. Instead of using thousands of workers in Fort McMurray, where the population has now swelled to 100,000, real estate prices are sky-high and workers are difficult to find, companies could simplify recruitment, cut salaries and boost productivity among workers who could be electronically connected with their tasks.

Finance, engineering, maintenance planning, human resources and supply chain work could be moved from Fort McMurray and done in cities like Calgary and Edmonton. In the future, as the model takes hold, substantial numbers of jobs could be sent overseas.

"We estimate that 40 to 60 per cent of all job titles and all work could be moved and be done remotely from Fort McMurray," he said.

"And maybe half of that could be moved offshore now."

Though he would not identify who, Mr. Denham said "there are a couple of clients we're working with on this topic."

With oil prices above $90 (U.S.) a barrel and rising, the world's biggest energy companies are once again turning their attention to northern Alberta, raising worries of a Fort McMurray labour crunch. The desire to keep costs as low as possible during a new boom has increased the willingness to consider all options.

If the idea begins to take hold, it would radically change the face of Fort McMurray, which has struggled with rapid growth. But, despite its growing pains, Fort McMurray has managed to create a surprisingly community-oriented city. Droves of people spend nights at a newly expanded recreational complex, complete with a large water park, and hotels have teamed up to offer discounted rates to out-of-town kids sports teams that come to use its high-end athletic facilities.

Fort McMurray is, according to the United Way, the most generous city in Canada, and it owes much of its virtue to the fact that companies like Suncor Energy Inc., Syncrude Canada Ltd. and Royal Dutch Shell PLC employ large, well-paid work forces - including substantial numbers of white-collar employees - in the city. Syncrude, for example, has 5,580 employees in the Fort McMurray area, and only 200 in Calgary and Edmonton.

Some companies are wary of uprooting Fort McMurray workers. They want to protect their "social licence" to operate, a key strategy that ensures salary dollars flow into local communities.

Moving parts of that worker base is "definitely not something Syncrude is considering," said spokeswoman Cheryl Robb. "We see ourselves as a member of the Wood Buffalo community … In fact, our retention program has incentives for employees to live in the local community."

Shell, which employs 2,000 in the area, believes "that it is a benefit to the community of Fort McMurray for our employees and their families to live, work and play in the city - and in doing so, contribute to the social fabric of the city," spokesman Phil Vircoe said.

Shifting vast numbers of jobs away from the oil sands would "mean ripping the heart out of Fort McMurray's middle class," said Gil McGowan, president of the Alberta Federation of Labour. "Those are the kind of jobs that form the backbone of Fort McMurray's economy, and their loss would actually be quite destabilizing."

Life as a boomtown "plays havoc on local pricing, local facilities, etc. I truly believe the community there would benefit from a more balanced, more sustainable approach to growing its infrastructure," he said. "Our hope is to get the whole industry thinking along these lines. As a result, everyone will benefit from a more rational deployment of where people work." 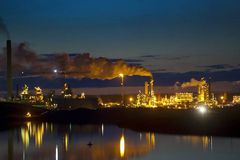 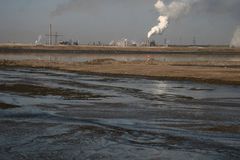 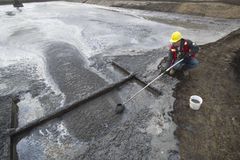