Ontario's electricity operator is asking its customers to bid on contracts that would see them paid for cutting their power consumption at peak times in order to avoid putting strain on the system.

In the first such auction in Canada, large industrial users and energy-service companies will compete to provide "demand response" to the Independent Electricity System Operator (IESO) as the province looks to conservation and efficiency measures to reduce the need for new generating stations.

With the advent of "smart grid" technology, the electricity market is rapidly evolving into one in which customers can communicate instantaneously with the system operators, and automate their ability to reduce electricity consumption when wholesale prices rise during peak hours. In the auction, companies will sign contracts that require them to participate in the wholesale market by shaving their demand when needed.

Unlike households, businesses that use more than 50 kilowatts of electricity a month pay wholesale prices that fluctuate hourly. If they have the flexibility to do so, they can lower their costs by avoiding peak prices – and generate a revenue stream by providing demand-response service to the IESO.

Typically, the additional power needed at peak times is provided by natural-gas plants that were built specifically for that purpose, or perhaps from imports from Quebec or the United States.

"If [companies offering demand response] are cheaper than the next resource – maybe it's an import, maybe it's a generator – and their bid into our market is more economic, than they will be dispatched and we expect them to respond," Tom Chapman, IESO's head of market design, said. "They get paid in order to be available."

Companies ranging from steel plants to pulp and paper mills to commercial buildings are lining up to participate. Service companies also work to aggregate demand-response capacity from a number of business customers and manage the technology needed to respond.

Initially in the auction, the IESO will be looking for companies that will commit to shedding as much as 350 megawatts of demand on those hot summer days – or frigid winter mornings – when the system is reaching its capacity. The province has existing demand-response contracts – done in a sort of pilot phase – that will be expiring in the coming years. As they end, the auction market will be increased.

On hot summer days, demand response has helped reduce peak demand by as much as 1,200 megawatts, or 5 per cent of provincial demand.

"We're hoping that – given that there is a lot of interest in the business community in participating – the competition will focus attention on costs, and we'll see really good prices coming out of the auction relative to what we've seen from contracts in the past," Mr. Chapman said.

The Liberal government in Ontario is pursuing a "conservation first" strategy in the electricity sector that includes demand response. Eventually, such demand measures could compete with new-generation options, though there are technical limits on how much load can be shed while ensuring system reliability.

The province is also working out details of its proposed cap-and-trade policy that will put a price on carbon dioxide emissions, and could provide additional advantage to the demand-response side of the market versus natural-gas generation. However, it is not clear yet whether the climate policy will affect the electricity market, which already saw prices climb as a result of the province's plan to end coal-fired power and boost renewable sources.

Some of Ontario's largest industrial consumers have the flexibility to shift their electricity consumption off peak hours, said Adam White, president of the Association of Major Power Consumers in Ontario.

"There are all sorts of examples across industry of a dispatchable resource on the customer side of the meter," Mr. White said. "And so the more we can supply this with assets already in place, the cheaper it is for everybody."

The market will develop dramatically with the increasing sophistication of digital controls.

"Demand response and customer engagement have to be a big part of Ontario's future. Otherwise we're sunk with all the costs that are coming," Mr. White said. "We have to figure out a way to be more conservative in our use of energy across the economy, and this is a great way." Opinion
Why Ontario should look west, not east, for hydro power
August 19, 2015 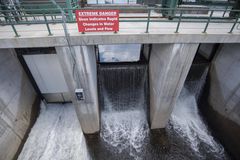