The federal government is providing another $2.9-billion in loan guarantees for the Muskrat Falls hydroelectric project – a move Newfoundland and Labrador's premier says will slightly ease power bills that are expected to soar.

"It is a good day," Dwight Ball said Thursday just after Natural Resources Minister Jim Carr announced the loan extension in the House of Commons.

"Any time you get an opportunity to actually save a project over $1-billion, and can put that back to help offset rates, that's always good for the province," Ball said in an interview.

Thursday's announcement extends the Muskrat Falls loan guarantee first affirmed by former prime minister Stephen Harper in 2012. Among other conditions, it requires that partners in both Nova Scotia and Newfoundland and Labrador remain committed to the project.

Carr said Ottawa is issuing the guarantee on the portion of the project led by provincial Crown corporation Nalcor Energy. Specific conditions will be negotiated with the province and Nalcor, and will include a guarantee fee of 0.5 per cent above the federal rate.

"Costs on the Lower Churchill project were mismanaged by former Conservative governments, putting Newfoundland and Labrador at financial risk," Carr told the Commons. "Today's decision means we will contribute to our climate-change goals and Atlantic Canada's future energy needs."

Ball said he expects the enhanced loan guarantee will cut at least 1.5 cents off rates that are estimated to hit 21.4 cents per kilowatt hour by 2021, before tax. That's almost double the 12 cents consumers paid last year – potentially adding $150 to an average monthly bill.

"My focus is finding mitigation measures," to make prices more affordable, Ball said. First power is expected to flow in about three to four years.

Carr said the decision is a good one for both the future prosperity of Newfoundland and Labrador, as well as Ottawa's commitment to cutting greenhouse gas emissions.

The decision isn't good for Quebec, however, according to that province's intergovernmental affairs minister.

"Ottawa has to correct their decision," Fournier said in an interview with The Canadian Press. "We will insist that the federal government compensates us so we aren't in an unequal situation."

Fournier added that his government isn't excluding taking Ottawa to court on the issue.

Estimated costs for the Muskrat Falls dam and power house now under construction near Happy Valley-Goose Bay have soared to $11.4-billion with financing. That's up from $7.7-billion when the former Progressive Conservative government sanctioned the project in 2012.

The joint venture between Nalcor and Nova Scotia utility company Emera will generate up to 824 megawatts of electricity. Power will be brought from Labrador to the island of Newfoundland and on to Nova Scotia through subsea links and a vast overland transmission network.

In a statement, the federal government says it plans to work closely with the province to protect the interests of Canadian taxpayers.

The statement also says the decision is in keeping with the government's long-term infrastructure plan, including $81-billion worth of commitments announced Tuesday by Finance Minister Bill Morneau.

Former premier Kathy Dunderdale announced in December 2013 that her Progressive Conservative government had finalized terms of the loan guarantee with the then-Harper government. She said it would trim more than $1-billion off total costs, allowing the province to secure a $5-billion loan to be repaid over 40 years at an interest rate of about 3.5 per cent.

Ball said Thursday that the extra $2.9-billion will be borrowed at a rate of 2.4 per cent. Other efforts to ease the burden on ratepayers will include selling surplus Muskrat Falls power, he added.

The project is beset with schedule overruns and various legal challenges still playing out in court.

A four-day occupation of the construction site last month by about 40 protesters concerned about potential methylmercury contamination added to the delays. 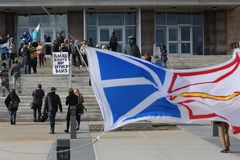