Natural Resources Minister Jim Carr says the federal government is focused on regulatory efficiency as it overhauls Ottawa's environmental assessment regime amid fears the Liberals are burdening the resource sector with too much regulation.

At their meeting in New Brunswick on Tuesday, Mr. Carr and his provincial colleagues agreed to assess the competitiveness of the country's resource sector, as major international oil and gas companies retreat from Canada.

The Liberal government will introduce legislation later this year or early next year that will overhaul the National Energy Board, the Canadian Environmental Assessment Agency and other key laws governing resource development.

Mr. Carr said the goal is to restore trust that he says was lost after the former Conservative government changed the environmental review process just five years ago with a goal of speeding project approvals. In a conference call from Saint Andrews, N.B., he said the current government remains committed to resource development – done sustainably and with far greater participation of Indigenous people.

"We have come a long way in that engagement and in finding the balance between economic development, environmental sustainability and partnership with Indigenous peoples," he said. "We think there's a very important value in getting resources to market sustainably."

The Minister vowed the proposed changes to the environmental assessment process will ensure project proponents have a certainty in the rules and reasonable timelines. However, business lobbyists say the government's recent discussion paper lacked important details and raised concerns about open-ended consultations, vague standards and overlap with provinces.

"There is a lot of detail to come that depending how it goes, could be problematic or could be workable," said Pierre Gratton, president of the Mining Association of Canada. "But it's critical for us."

He said the Conservative changes exempted some key sectors from federal environmental assessment, but not mining. As a result, mine developers proponents can face damages to address cumulative impacts from development that had little to do with their project.

The Canadian Chamber of Commerce warns that Ottawa is proposing to extend its jurisdiction for environmental reviews into areas that provinces are already active, posing the danger of duplication despite Mr. Carr's pledge that the government will follow a "one project, one review" approach.

By embarking on an effort to overhaul the review process, the government has created tremendous uncertainty among investors in the resource sector, said Katrina Marsh, director of natural resources and environmental policy at the business lobby group.

Ms. Marsh said the Liberals have pulled back from some of the more controversial recommendations made by an expert panel on the Canadian Environmental Assessment Act, but significant concerns remain for business.

Saskatchewan Energy Minister Dustin Duncan said the Liberals will be adding additional hurdles for resource investment in Canada, even as they impose regulatory burdens in the form of carbon taxes, methane-emissions regulations and other climate-change-related measures.

"We're definitely concerned," Mr. Duncan said. "We need to be able to show the market and the investment community that we can move projects forward, and that is not happening right now."

The Saskatchewan minister said his provincial colleagues prevailed upon Mr. Carr to agree to a year-long assessment of the competitiveness of the resource sector, which he hopes will be a catalyst for more business-friendly policies.

Mr. Carr noted that the Liberal government has approved a number of major energy projects, including the expansions of Kinder Morgan Inc.'s Trans Mountain pipeline to Vancouver harbour, as well as Enbridge Inc.'s Line 3 export line to the United States. It has also backed TransCanada Corp.'s Keystone XL project. Each of those proposals face some remaining hurdles from local politicians and court actions. 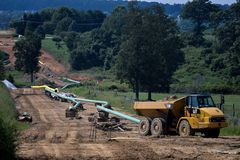 Agriculture ministers reach five-year, $3-billion deal to boost farm sector
July 21, 2017
Opinion
Canadian business can no longer ignore sustainable development
July 16, 2017
Follow Shawn McCarthy on Twitter @smccarthy55
Report an error Editorial code of conduct
Due to technical reasons, we have temporarily removed commenting from our articles. We hope to have this fixed soon. Thank you for your patience. If you are looking to give feedback on our new site, please send it along to feedback@globeandmail.com. If you want to write a letter to the editor, please forward to letters@globeandmail.com.
Comments