Paramount Resources Ltd. is offering to buy back the shares of MGM Energy Corp. it doesn't already own for $50-million in stock after MGM came up empty-handed in its search for a partner to help fund development of potentially rich Northwest Territories shale oil prospects.

The move follows a series of disappointments for MGM, which initially had big plans to drill for natural gas in the Mackenzie Valley region of the NWT. Those hopes were dashed by years of delays in the development of the Mackenzie gas pipeline, which would have provided an outlet for that supply.

It then turned its attention to the Canol oil shale play near Norman Wells in the central Mackenzie Valley, touted by the government of the NWT as its top near-term energy development. Last month, the company said it had failed to find a joint-venture partner for the project and would not drill any wells on its lands through next winter.

The move shows that operating in Canada's Far North still requires very deep pockets and great patience. Despite the potential for massive oil and gas finds, the region is beset by high development and operating costs, due partly to distance from major markets, as well as lengthy regulatory processes before any drilling can start, Henry Sykes, MGM's president, said. He has headed up MGM since Paramount first spun off the explorer in 2007.

"We find the processes are becoming more complicated, less predictable and more costly, and for a small company that makes things very difficult," Mr. Sykes said in an interview.

The company drilled one of its 11 wells with Royal Dutch Shell PLC, but has been unable to find a new partner despite the potential for large oil discoveries. Its main exploration licence, known as EL466, has estimated discovered oil in place of 625 million barrels.

Large firms, including ConocoPhillips and Husky Energy Inc., are also operating in the area.

"The feedback we received from companies is that the play looks very interesting and in some ways very attractive, but it's difficult to see a clear path to commercialization, and without that, people were not prepared to invest at this stage," Mr. Sykes said.

One problem, he said, is the absence of a standard timeline, or even scope, for applications to be vetted by regulators. That could change with Ottawa ceding more legislated powers to the territorial government under the "devolution" process now under way, Mr. Sykes said.

Under the buy-out proposal, Paramount will offer one of its shares for every 300 MGM shares. At a Paramount stock price of $45, the bid translates into 15 cents per MGM share. Paramount owns nearly 14 per cent of MGM's shares.

Calgary oil man Clayton Riddell, CEO of both companies, owns 31.6 per cent of MGM in his own account, and he has said he will support the transaction, according to MGM.

MGM's shares tumbled 23 per cent to 15.5 cents on the Toronto Stock Exchange on Tuesday. That is less than half the price of a year ago.

The company said it will set up a committee of independent directors at a board meeting on Wednesday to evaluate Paramount's proposal. The deal would be completed through a plan of arrangement, in which a majority of the company's minority shareholders would have to vote in favour.

"Should this acquisition be approved, over the longer term, MGM's assets would ultimately be taken on and developed by a better capitalized company," FirstEnergy Capital Corp. analyst Cody Kwong said in a research note.

ConocoPhillips recently made history by beginning the first horizontal drilling and hydraulic fracturing operation in the Conol shale play. 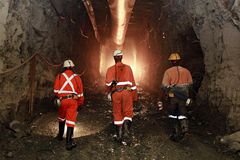