Canada will see a upsurge in protests and other direct action from indigenous communities if governments approve pipelines and energy projects without their consent, Assembly of First Nations National Chief Perry Bellegarde said Thursday.

In a speech to an industry conference, Mr. Bellegarde said First Nations people in Canada are determined to assert their right to self-determination, and that includes free, prior and informed consent over energy projects that affect their traditional territory.

The Liberal government has endorsed a United Nations declaration that includes the principle of consent, but federal ministers have dodged the question as to whether that endorsement means First Nations can veto projects. The federal government is set to make a decision before Christmas on Kinder Morgan Inc.'s Trans Mountain expansion, which is opposed by some First Nations communities around Vancouver where the pipeline ends, as well as their allies from across North America.

Mr. Bellegarde said opponents to pipelines may mount high-profile demonstrations aimed at blocking construction, as has happened around the Standing Rock Sioux reservation in North and South Dakota, where tribes are opposing a pipeline to take crude from the Bakken shale oil fields to refineries in the Midwest.

Direct action "is definitely an option – like Standing Rock in the States," he said after his speech to the Positive Energy conference at the University of Ottawa. "We always stand up for our rights as indigenous people and it's always balancing legal and political action with political activism."

He said some projects simply should not be built because they have not obtained the consent of First Nations people.

First Nations activist leaders are mounting a "day of action" on Monday to press the Liberal government to live up to its promises when it endorsed the UN declaration earlier this year. They point to the government's decisions to override objections of some First Nations communities by approving of the Pacific NorthWest liquefied natural gas terminal in British Columbia, permitting the Site C dam in northeastern B.C. and offering broad support for crude pipelines.

On Wednesday evening, Natural Resources Minister Jim Carr told the Positive Energy conference that Canada needs pipelines to access new markets and maximize the value of its resources, even as it transitions to a lower-carbon economy. "Building windmills and pipelines is not contradictory," he said.

The government is still reviewing the Trans Mountain proposal, but Mr. Carr acknowledged that approval of any oil sands pipeline will be met with strong opposition from a vocal minority.

On CTV's Question Period last Sunday, Mr. Carr dodged the question of whether First Nations communities have the right to provide their consent to projects, saying only that the government is consulting extensively with indigenous people. On the same show, B.C. Premier Christy Clark said the legal threshold set by the Supreme Court of Canada is "consultation and accommodation," rather than "free, prior and informed consent."

In his speech to the energy conference, Mr. Bellegarde noted that many First Nation communities support development – so long as it is done responsibly – but are demanding to be full partners rather than simply bought off with benefits.

A study released at the Positive Energy conference concluded that industry and government must do a far better job engaging communities – whether aboriginal or not – to gain the local support for energy projects in their area.

"Engaging the community should be about more than consultation and accommodation," said the report, which was sponsored by the University of Ottawa and Calgary-based Canada West Foundation, a non-profit think tank. "It can involve true collaboration and creating a direct stake in the process."

Editor's note: Perry Bellegarde's title has been corrected in the online version of this article.

Anti-pipeline accord could deepen divide in indigenous communities Subscriber content
May 16, 2018

First Nations coalition ramps up opposition to pipelines
May 16, 2018 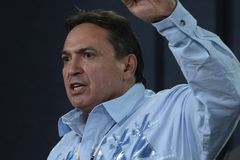 Opinion
First Nations’ right to be consulted not a right to veto energy projects
May 16, 2018