The collapse of the NDP at the polls this week denied power to a party that would have blocked oil pipelines in British Columbia.

But opponents of two proposed pipelines, one that would cross central B.C. to Kitimat and another that would expand an existing route to Vancouver, say a Liberal win does not mean the projects are any more likely to proceed.

"I'm assuming that Enbridge is going to feel a certain amount of confidence from what happened in the election. I think they'd be sadly mistaken to do that," said Art Sterritt of Coastal First Nations, a coalition of bands fighting to stop the proposed Northern Gateway project. "As far as we're concerned, it's still dead."

Ivan Giesbrecht, communications manager for Enbridge in Vancouver, however, said he thinks the Liberal win very much means his company's proposal remains alive.

"I think British Columbians have spoken quite clearly that economic development and economic prosperity is a priority, but not at the expense of the environment," he said. "You know, that has been our message all along as well, and we are certainly committed to working with the Liberal government to move that forward."

Many of those opposed to oil pipelines had been hoping for an NDP victory, because leader Adrian Dix had promised to reject both the Enbridge project and the Kinder Morgan proposal, which would expand an existing pipeline to Vancouver.

Premier Christy Clark left the door slightly ajar to both, setting out in the Liberal platform five conditions for any pipeline to get her support.

They include a completed environmental review process, world-leading oil spill response and prevention methods, meeting legal requirements to First Nations, and "a fair share of the fiscal and economic benefits" for B.C.

Mr. Sterritt said those conditions "are very onerous" and he doubts Enbridge will ever be able to meet them.

"For example, oil spill prevention hasn't changed in 25 years," said Mr. Sterritt. "We don't think Northern Gateway is ever going to pass the test on that."

He said his group has asked for a meeting with Ms. Clark to discuss the Enbridge pipeline and liquefied natural gas developments, for which both the Liberals and NDP expressed support during the campaign.

Mr. Sterritt said he will tell Ms. Clark that Coastal First Nations support LNG development as long as it is environmentally sound, but cannot accept the risk of the oil tanker traffic an Enbridge pipeline would generate.

A sign of the tensions around the Enbridge proposal showed this week, when Gitga'at leaders asked company representatives who were touring the area to look at oil-spill response needs to leave the community of Hartley Bay.

"This whole project puts everything in our territory at risk and without benefits," said Gitga'at councillor Marven Robinson, adding that he would like Ms. Clark to visit to see what would be endangered.

Eric Swanson, campaign director for the Dogwood Initiative, said although an NDP win would have closed the books on the pipeline projects, he thinks it is only a matter of time before the Liberals come to the same conclusion.

"The wall of First Nations opposition remains," he said. "And the sentiment across British Columbia hasn't changed. Most people are against these proposals – Enbridge particularly, but also Kinder Morgan."

The federal joint review panel that is holding environmental hearings into the Enbridge project is drawing to a close, with final arguments due by May 31, followed by oral replies June 17 to 28.

In a statement on Thursday, Ian Anderson, president of Kinder Morgan Canada, said the National Energy Board has approved the commercial aspects of the proposed Trans Mountain expansion, which "provides us the necessary economic certainty to proceed."

He said Kinder Morgan will file an application with the NEB later this year. 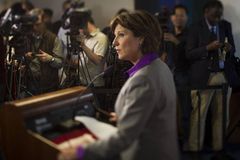