The energy and mining sectors have been among the hottest growth stories in Canada, but with commodity prices falling sharply, bullish optimism is being seasoned with a new sense of caution.

Oil sands producers are particularly vulnerable, as crude prices have dropped below levels needed to generate a reasonable rate of return on new projects – though industry analysts don't expect the lower prices to persist for long.

Investors signalled a deep lack of confidence in the global economy on Monday, trashing the value of natural resource shares as well as commodities such as crude oil and copper, which had soared on expectation of tight supplies and buoyant demand from emerging economies.

Crude oil prices – which peaked above $114 (U.S.) a barrel just four months ago – accelerated a summer retreat amid the market meltdown Monday, with West Texas intermediate falling by $5.67 a barrel – or 7 per cent – to $81.01 a barrel on the New York Mercantile Exchange.

The slump in oil prices will force Canadian companies to re-evaluate their expansion plans should they fail to rebound.

Just two months ago, Cenovus Energy Inc. announced its 2011 strategic plan, which would boost its oil sands production sixfold over the next decade to 400,000 barrels a day. But Cenovus's strategy assumes West Texas crude will range between $85 and $105 a barrel between 2012 and 2021, though the company had an $80 target for crude prices for 2011.

"When you have a $5 or $6 drop in one day, you certainly pay attention to it," Cenovus chief operating officer John Brannan said in an interview. "But over all, we have typically been the low-cost producer. … Yes, we don't like drops in prices like this, but long term, it is generally where we said it is going to be."

While Cenovus would likely continue its planned strategy with a medium-term price forecast in the low- to mid-$80 range, Mr. Brannan said other companies will have to pull back on investment plans.

"But we think this would take some pressure off the potential inflation. If you continue with lower oil prices, those who are doing projects will be able to take advantage of the labour and availability of equipment because some of the more expensive projects will not go forward."

The Calgary-based Canadian Energy Research Institute (CERI) has calculated that companies constructing new steam-assisted gravity drainage – or SAGD – projects will require a WTI price of more than $90 a barrel to earn a 10-per-cent return, while new mining projects require prices well over $100.

"The new projects have to be worried," said Dinara Millington, CERI's research director. "The decision on capital investment has to be made on today's prices, so the forecast for three to five years is critical. But each company uses its own forecast and has a different cost structure."

Like their colleagues in the oil industry, mining executives are reviewing forecasts that help determine future investments, though companies have yet to announce any dramatic changes to their production or investment plans as a result of the steep drop in metal prices over the past few days.

The difference this time around, compared with the 2008-09 global market meltdown, is that miners have more cash on their balance sheets.

Last time, many racked up huge debts, in hopes of steadily rising prices, to pay for expansions or acquisitions. When commodity prices crashed and credit markets froze, companies were stuck with huge debt loads. This time around, miners have hoarded more of the cash earned from record-setting prices, in case of another crisis.

The downturn that began in "2008 is still in our heads as we plan our year, each year," Quadra FNX Mining Ltd. chief executive officer Paul Blythe said in an interview on Monday.

Mr. Blythe, whose company produces copper, gold and platinum at mines in Canada, the United States and Chile, said while plans are to push ahead with current projects and production, that could change if metal prices fall further. Copper dropped below $4 a pound on Monday for the first time in months.

Copper fell 4 per cent on Monday, after dropping 8 per cent last week, to close at $3.96 a pound in New York. If copper were to drop to about $3 – a level not seen since the spring of 2010, producers such as Quadra would likely need to revisit their investment and production plans.

HudBay Minerals Ltd. CEO David Garofalo said his copper projects are profitable as long as copper stays above $2.50, and adds that his company is well-financed.

"We don't have to scramble for capital," he said. "Our projects are robust in a much lower metal price environment, so we are going to continue the course."

Gold producers are in the best position right now, compared with other mining companies.

While the price of the precious metal continues to hit record highs – surpassing $1,700 an ounce on Monday – costs to produce it are falling as the prices of oil and raw materials plummet.

"The good news is that our revenues and cash flow and earnings go up," alongside the rising price of gold, said Chuck Jeannes, CEO of Vancouver-based Goldcorp Inc. "The other side is also beneficial in that we see oil prices drop."

Still, Goldcorp isn't about to boost its production and expansion plans based on short-term market moves.

Gold stocks that shine through the rough
May 3, 2018
North American markets plunge
May 3, 2018
earlier
Rob Carrick on investing strategies for volatile times
May 3, 2018 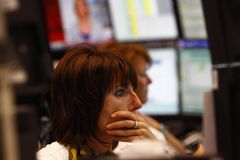