The province of Quebec formally linked its cap-and-trade system with California's market on Thursday, as the two jurisdictions plow ahead with ambitious plans to put an escalating price on carbon in order to reduce emissions.

Quebec and California are the only members moving forward with cap-and-trade programs in what was once a promising alliance of 11 states and provinces comprising the Western Climate Initiative that envisaged a North American market for carbon trading.

The joint California-Quebec program will blaze a trail in North America for a market-based approach to reducing greenhouse gas emissions, and may serve as a prototype for other provinces and states as well as the U.S. government as the Environmental Protection Agency looks to curb emissions from the country's huge fleet of coal-fired power plants.

There is a "potential for this market to serve as an example for other North American subnational jurisdictions to follow if it can prove to be successful," said Robin Fraser, a Toronto-based analyst with the International Emissions Trading Association.

The province and state began last year regulating industrial greenhouse gas (GHG) emitters such as refineries and smelters, which now need "allowances" for each tonne of carbon dioxide they send into the atmosphere. While most of the allowances are provided free, both jurisdictions have held auctions that allow emitters to purchase additional ones to cover future needs.

As of Thursday, Quebec-based industries can now purchase credits from California – for example, credits generated by a reforestation effort on the state's northerly coast – in order to meet provincial targets for emission reductions. In return, California industries can tap Quebec's carbon market to satisfy their regulatory requirements.

Some industry spokesmen warn that the market-based system could lead to an outflow of dollars from Quebec to California where allowances are expected to be cheaper to create due to the size and complexity of the economy.

The province's gasoline marketers – including refiners such as Suncor Energy Inc. and Valero Energy Corp. – face the biggest challenge a year from now when fuel distributors will need to hold allowances to cover emissions that result from the burning of every litre of gasoline and diesel they sell.

Building on previous Liberal government policies, the Parti Québécois has released a plan that would see the province reduce its emissions to 25 per cent below 1990 levels by 2020, and the cap-and-trade system is a key part of that effort.

Quebec held an auction in early December for emission allowances that covered both 2013 and future needs. Participants included the largest industrial players in the province, such as Suncor and Valero, miner Glencore Xstrata PLC, forestry giant Tembec Inc. and Hydro-Québec. But the auction was undersubscribed and allowances sold at the floor price of $10.75.

Traders say the linkage of the two systems will improve liquidity for both markets, but particularly for Quebec-based industries.

"There isn't a lot of liquidity in Quebec," said Anthony D'Agostino, director of emission-market trading for RBC Dominion Securities.

"As they link up, it will help people in Quebec being able to hedge in the California market."

But there is a downside to the linkage, warned Carol Montreuil, vice-president with the Canadian Fuels Association. His members will need to buy billions of dollars worth of allowances after 2015, which will drive up gasoline pump prices. And much of the money could flow out of the province.

"That's going to be the big challenge," Mr. Montreuil said. "There's all that cost and yet there's absolutely nothing that guarantees you that emissions in the province will be reduced, because these emissions could be covered in the California market."

Making the most of wastewater
December 29, 2013 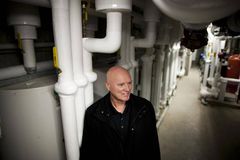