For decades, Quebec's foreign-owned aluminum sector has been a source of pride in a province that can use all the high-powered manufacturing might it can get.

Boosted by financial backing from the government and cheap hydroelectric rates, the sector has played a starring role in the province's economic development.

But the three major players in North America's most aluminum-intensive region – the third largest in the world after China and Russia – struggle to make Quebec a centre of aluminum-product innovation.

Despite years of effort by the industry to update, including Alcoa's confirmation of plans on Monday for a $2.1-billion expansion and modernization program at three Quebec facilities, the province remains for the most part a simple exporter of primary aluminum to the four corners of the world.

For the industry to continue to thrive, moving up the value chain is imperative. Powerful emerging players like China and Russia are already shifting in a big way from primary manufacturing to higher-margin products, part of a growing worldwide shift to the use of aluminum in non-traditional areas.

The lightweight industrial metal has long been a staple material in such products as window frames, juice and soft drink cans and cooking utensils. But its usage is being stretched into other areas, including building construction and aerospace.

"Aluminum is becoming a tremendous source for all sorts of applications – the auto sector for example," says Jesus Villegas, senior analyst with Harbor Intelligence in Austin, Texas. "Cars are increasingly being made with aluminum parts."

Companies such as Alcoa Inc. – the U.S.-based parent of Alcoa Canada – that are developing innovative uses for aluminum are benefitting to a much greater extent in foreign markets, notably Asia.

Alcoa Inc. is already working with a Chinese partner – Zhengzhou Yutang Bus Co., the country's biggest bus manufacturer – to make environmentally friendly buses with aluminum chassis, turning out about 27,000 a year. The vehicles are 46 per cent lighter than a regular bus, so they use less fuel and emit fewer greenhouse gases.

"Why can't we do that here?" asks Jean Simard, head of the Aluminum Association of Canada. "It's not rocket science. It's common sense."

Canada produced 2.9-million tonnes of aluminum in 2010, about 7 per cent of global capacity. About 80 per cent of that is exported.

In Quebec, where 90 per cent of the Canadian industry is concentrated, aluminum production represented 10 per cent of the total value of manufactured exports last year. It employs an estimated 30,000 people directly and indirectly.

The three main players – Rio Tinto Alcan, Alcoa Canada and Aluminerie Alouette – are aware of the risks posed by more aggressive competitors. They plan to invest between $7-billion and $10-billion over the next 10 years to modernize and expand their Quebec facilities to produce more innovative, higher-margin products.

Some of that is earmarked for R&D and special projects. The companies, for example, have formed a consortium to develop a prototype for a 30-seat microbus made with aluminum parts. Aluminerie Alouette has a program to encourage its suppliers to come up with ideas for integrating aluminum in their products.

There are also plans for a public-private sector collaboration on the development of aluminum decking for bridges to replace steel.

"Quebec and B.C. – where a major aluminum smelter is located – will always be centres of smelting because of the available and highly competitive power," he said.

Setting up major value-added facilities – such as plants that make aluminum wheels – is difficult in Quebec because it is far from major centres such as Detroit and shipping costs are prohibitive, he said.

The fact that the leading aluminum producer in Quebec – Rio Tinto Alcan – is no longer in the business of making semi-fabricated products (it has sold off those divisions over the years) doesn't help foster a transformational attitude, he said.

And there's another key stumbling block – government regulations that limit the use of aluminum in construction and infrastructure projects, and thus hamper the development of homegrown expertise.

Alexandre de la Chevrotière, president and chief executive officer of Montreal-based aluminum design-and-build firm Maadi Group, finds it incredible that the provincial bidding process for infrastructure projects excludes the use of aluminum as a construction material.

Rules in the other provinces vary, but steel remains the No. 1 choice there as well, he said.

"On the one hand, the Quebec government pushes the big aluminum producers to create jobs in the transformation sector. And yet they shut out aluminum when they put out tenders," he said.

That's in stark contract to the attitude in Europe, where about 30 per cent of construction projects use some aluminum, says Mr. de la Chevrotière, whose company makes such products as all-aluminum pedestrian and bicycle bridges.

A spokesman for Sam Hamad, Quebec's Minister for Economic Development, said the government is working on developing a new aluminum-transformation policy but the Minister won't comment until the plan is completed and ready to be unveiled, some time in the next few months.

To upgrade the Shipshaw power station in Quebec.

To prepare for a $2.5-billion modernization of its Kitimat smelter in B.C.

To improve the efficiency of its Quebec facilities. 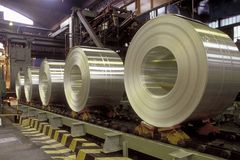 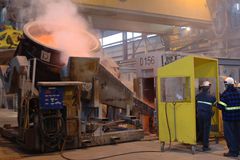 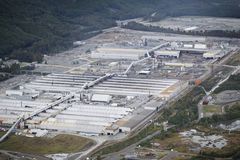