Keyera Energy Corp., Kinder Morgan Inc. and Gibson Energy Inc. are some of the largest players to announce new storage projects in recent weeks, as oil sands production shows few signs of letting up despite the deep slump in energy prices.

Gibson said this week it would add another 900,000 barrels of fresh capacity to its tank operations in the marketing hub of Hardisty, Alta., as part of a long-term agreeement with Teck Resources Ltd. Keyera and Kinder Morgan said earlier this month they would build as much as 4.8 million barrels of new oil storage at Edmonton under a 50-50 joint venture, with potential to expand to 6.6 million barrels depending on future demand.

Such projects point to a looming collision between fast-rising production in the oil sands and an oil pipeline network that's running at or near full capacity, reviving fears of an export crunch that has played a role in the deep discounting of Alberta's extra-thick crude.

At the same time, multibillion-dollar pipeline expansions are bogged down by environmental opposition and political inertia. In the latest delay, TransCanada this month pushed the proposed start date for its $12-billion Energy East project back by at least a year over concerns a related export terminal in Quebec would harm beluga whales.

"If you've got these big export pipelines that are large enough to move more than your production, which is what our history has been, you don't build storage here. You move it to a market where the refineries and everybody has storage already," said Jackie Forrest, vice-president at ARC Financial Corp. in Calgary.

Companies in the oil sands are poised to dump more crude into a market already grappling with oversupply and tepid demand, although oil prices have recently firmed up. West Texas intermeidate oil rose on Tuesday amid signs of falling U.S. output and weakness in the U.S. dollar.

Teck and its partners are pressing ahead with their $13.5-billion Fort Hills megamine, which will add 180,000 barrels a day of new capacity in northern Alberta starting in late 2017. ConocoPhillips Co., Husky Energy Inc. and Imperial Oil Ltd. are also set to start up new developments, the result of investments made years before oil prices hit the skids last summer.

The glut of crude in storage across North America has weighed on prices in recent months, as players store cheap oil for sale at higher prices in the future. By contrast, most tank space in Alberta is for logistical use.

Analysts at market intelligence firm Genscape say a recent surge in crude oil inventories in Edmonton is expected to dissipate as Enbridge starts up a 570,000-barrel-per-day conduit linking the region with Hardisty to the east, which serves as a jumping-off point for exports to the United States.

With major expansions held up, Enbridge has sought to boost capacity on its massive mainline export system through operational tweaks. Such moves added 340,000 barrels a day of new capacity to the massive network, which handles the bulk of Canadian oil exports and transported a record 2.2 million barrels a day in December and January, the company said.

Enbridge is poised to connect another 11 oil sands projects to the central Alberta region by 2017, potentially exacerbating a regional glut unless major new export routes materialize.

"We're seeing that incremental production out of Canada goes by rail, not pipe," said Steven Paget, analyst at FirstEnergy Capital Corp. "The pipelines are full."

Growth in storage capacity is tied, in part, to increases in crude-by-rail shipments, which require more staging than do deliveries by pipeline.

However, the amount of crude transport on rail has dropped amid the sharp plunge in U.S. oil prices, falling roughly 5 per cent between the third and fourth quarters last year, according to National Energy Board data.

Oil storage brims in U.S. and Canada, but for different reasons Subscriber content
May 12, 2018 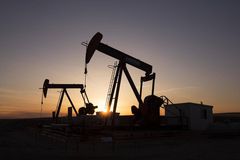 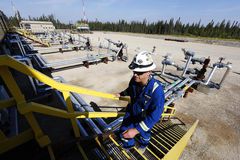