After months of deliberation by two government bodies, a final decision has been released ruling that Chinese solar panels are being dumped into Canada and they could damage the Canadian solar industry.

The judgment – issued by the Canadian International Trade Tribunal on Friday – said that dumping and subsidizing of some Chinese-made solar panels have not yet hurt Canadian panel makers, "but are threatening to cause injury to the domestic industry."

That means that provisional duties imposed on some Chinese companies by the Canada Border Services Agency – the other body looking into the case – will be refunded, but tariffs will apply from now on, said lawyer Thomas Timmins of Gowlings in Toronto.

The CBSA's provisional duties, set in March, ranged from 9 per cent to 286 per cent, depending on the specific Chinese manufacturer. The final tariff levels have not yet been revealed.

The CBSA was responsible for deciding whether subsidization and dumping actually took place, while the CITT looked at whether there was damage to Canadian manufacturers.

The Canadian solar industry has been divided about the imposition of import duties. The panel manufacturers that complained about dumping are happy that action has been taken to protect them, but some industry participants say that import duties will boost the price of solar products and depress demand. That could dent enthusiasm for solar power and slow the shift to renewable energy in Canada.

The association that represents the entire solar industry says it is just gratified the case is finally settled.

"The Canadian solar industry is happy to see the issue resolved," said John Gorman, president of the Canadian Solar Industries Association. "What we need is predictability and transparency … which lets people do their planning."

Mr. Gorman said overall prices of solar panels will continue to fall, and Canada will remain a significant manufacturer of panels for North American markets.

The CITT and the CBSA waded into the solar-dumping issue last year after four Ontario-based solar-panel makers complained they were being severely hurt by competition from cheap Chinese imports. The panel manufacturers – Eclipsall Manufacturing Corp., Heliene Inc., Silfab Solar Inc. and Solgate Inc. – said unfair competition was cutting into their sales and market share, and putting them under pressure to cut their prices.

Heliene president Martin Pochtaruk said his company has already seen an impact from the provisional CBSA decision earlier this year. "We are selling products to companies that otherwise would buy Chinese products," he said. "The fact that there was a chance of us winning made buyers consider a Canadian supplier instead."

The ruling doesn't eliminate competition, he noted, because there are many suppliers around the world who are not subject to tariffs. But it does level the playing field, he said. Heliene, which makes solar panels at a plant in Sault Ste. Marie, Ont., "can compete with margins from any market economy where costs are more or less the same," Mr. Pochtaruk said.

Several other countries – including the United States – have also found that Chinese solar panels were dumped into their markets, and have put in place punitive tariffs. Australia recently ruled that some Chinese manufacturers dumped panels in that country, but it said the tiny local industry was not harmed sufficiently to justify imposing countervailing duties. 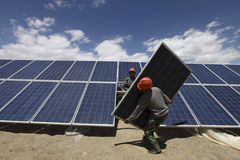