Platinum mining companies are heading into a final showdown with 70,000 striking workers this week, trying to break a stubborn union that has spearheaded the longest and costliest strike in the history of South African mining.

The outcome is likely to trigger a major overhaul of the country's platinum sector, leading to mine closings, greater mechanization and thousands of job cuts. It could indirectly benefit several Canadian companies that plan to operate mechanized platinum mines in South Africa.

The three major producers, accounting for about 40 per cent of the world's platinum production, are seeking to bypass the union by taking their wage offer directly to employees in cellphone text messages, public meetings and radio commercials.

One of the three companies, Lonmin PLC , has set a Thursday deadline for phone-message acceptance from its employees. It is hoping to have its employees back at work by the middle of next week. The other two companies are making similar efforts.

The strike is in its 15th week, inflicting heavy damage on the mining firms and the workers, with no sign of a revival of the talks. The three major producers have lost an estimated $1.6-billion (U.S.) in revenues so far, while the employees have lost about $700-million in earnings.

The strike has become deeply entangled in South African politics, with a national election on Wednesday. A major strike in 2012 ended in a bloodbath when police gunned down 34 protesters at the Marikana mine, and the violence has become a major political issue, with an inquiry continuing to examine those deaths.

A prominent opposition leader, Julius Malema, attracted crowds of striking workers to his campaign rallies in the platinum belt on Tuesday. He urged the workers to continue their strike, while asking them to vote for the opposition in the election. "I want to salute you workers for standing firm," he told one rally.

The Association of Mineworkers and Construction Union (AMCU), announced this week that the strike will continue. Its leader, Joseph Mathunjwa, said the "platinum cabal" was playing "a game of smoke and mirrors underpinned by deceit, dishonesty and bad faith."

The three companies – Lonmin, Impala Platinum Holdings Ltd. and Anglo American Platinum Ltd. – said on Monday that the union decision to continue the strike was "disappointing." They said the strike was causing "deep and adverse impacts" on the workers and local communities.

The companies complained that many employees want to return to work but are "fearful of doing so, due to the threats to their personal safety." It cited "numerous assaults" on employees and "dozens of incidents of threats of personal harm by faceless individuals, or by strike leaders from AMCU meeting platforms, aimed at groups or individuals who are at work, or who might be contemplating a return to work."

South African President Jacob Zuma said on Monday that the union is being irresponsible because its actions are causing workers to lose their jobs. He urged the union to find a compromise with the companies.

In a research report on the platinum sector last month, analysts from Canadian Imperial Bank of Commerce said that the only "bright spots on the horizon" are for companies with the ability to produce mechanized low-labour mining operations – including Canadian-based companies such as Ivanhoe Mines Ltd. and Platinum Group Metals Ltd.

The CIBC report said the strike has "irreparably damaged" the South African platinum industry and will result in "large-scale shifts" into mechanized mining. "The fallout from this strike will likely reverberate across the South African mining landscape for years to come, with the gold and coal sectors already cringing about a possible replay."

The union is seeking a doubling of wages to about $1,200 a month. It later offered to accept increases that would reach that amount within three or four years. The companies have offered a 10-per-cent rise and other benefits that would increase the total monthly compensation to $1,200 by 2017.

Zuma speaks volumes when he doesn’t stick to the script
Subscriber content
May 6, 2014 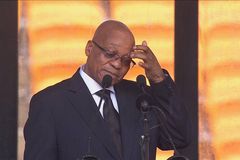