An Alberta judge has accepted a bargain struck by prosecutors and oil sands producer Syncrude Canada Ltd. that will see the company pay a $3-million fine - the largest environmental penalty in Alberta history - after being found guilty of the deaths of 1,606 birds on its tailings ponds two years ago.

Prosecutors say the amount will set an industry-wide precedent, but critics dismissed it as a slap on the wrist to the massive company.

Federal prosecutor Kent Brown had suggested he may seek to apply his maximum fine to each and every one of the 1,606 ducks, a fine that would total about $481-million. On Friday, he acknowledged again that avenue would "at least theorhetically" been available to him.

Instead, they struck a $3-million compromise, which was submitted to and accepted by the case's judge Friday.

"At Syncrude, we're eager to move forward. The incident haunted us and we regret that it ever happened," company spokeswoman Cheryl Robb told The Globe and Mail. She declined to say why Syncrude paid more than the $800,000 which she called, contrary to Mr. Brown's threats, the "maximum fine."

"This creative sentence reflects the seriousness of what happened," Ms. Robb said.

The $3-million will be split among government, nature groups and post-secondary institutions.

The $300,000 federal fine will head to Ottawa. Half the provincial fine will go to provincial coffers, while the other half will be used to set up a diploma program in Wildlife Management at Keyano College in Fort McMurray, near the oil sands. Another $1.3-million will be handed over to Edmonton's University of Alberta for a study on bird migration patterns and the effectiveness of bird deterrents - the study will be led by a U of A professor who was called to testify against the company during the case. Finally, $900,000 will go towards the purchase of new land for a nature conservancy east of Edmonton.

The judge was under no requirement to accept the deal struck by the provincial and federal crown attorneys and Syncrude, but after a brief recess Friday morning agreed to do so.

"We did an awful lot of work, and I was very pleased that he had felt we'd done a good job in addressing the sentencing principles," provincial prosecutor Susan McRory said in an interview. "We have legislation, we enforce the legislation, and the judge was convinced we had enough evidence to prove the case beyond a reasonable doubt."

The fine, however, represents a small figure for the massive oil sands company, which despite a low price of oil had revenues of over $7-billion in 2009. Syncrude produces about 350,000 barrels of oil a day and, along with Suncor, is one of the two longest-tenured producers in the oil sands. The total penalty (which breaks down to $1868 per duck) is slightly less than Syncrude's daily net profit in 2009. Total profit that year was $1.175-billion.

Environmental groups criticized the penalty as a slap on the wrist. The opposition New Democrats dismissed it as a "drop in the bucket."

"A three million dollar fine to a multibillion dollar company that has violated the law amounts to no more than a slap on the wrist and does not send a strong message to the rest of the industry," Mike Hudema, a Greenpeace spokesman who attended much of the trial, said in a written statement.

But federal prosecutor Kent Brown stressed that it's still significant.

"Even though it's only three million bucks and Syncrude makes that in an hour or whatever it is, it's still three million dollars," Mr. Brown said in an interview. "The way we tried to look at it - me in particular - this sentence isn't just about Syncrude or a company of that size. It's about any company that may be involved in an activity that would affect migratory birds."

The Harper government had been paying close attention to the trial. Environment Minister Jim Prentice swiftly issued a statement on the agreed penalty Friday.

Throughout the trial, the Crown argued that Syncrude did not deploy its cannons, effigies and other deterrents - meant to scare migratory birds off of its 12-square-kilometre tailings pond - quickly enough, leading to the birds' deaths in the toxic pond, which contains oily bitumen byproduct.

The prosecution was struck up by an environmental group, Ecojustice, on behalf of a private citizen before the province and federal government took it over.

The deal represents a shift in gears for Syncrude. Its trial lawyer, Robert White, had urged his employer to fight the guilty verdict. Ms. Robb confirmed that Mr. White no longer represents the company, which elected to simply pay a fine rather than drag out the high-profile court battle. 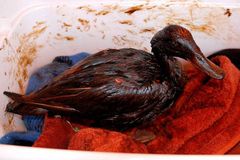 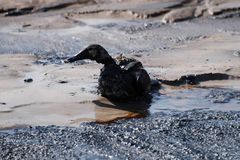 Syncrude lawyer questions effectiveness of sound cannons to scare off ducks
March 3, 2010
Follow Josh Wingrove on Twitter @josh_wingrove
Report an error Editorial code of conduct
Due to technical reasons, we have temporarily removed commenting from our articles. We hope to have this fixed soon. Thank you for your patience. If you are looking to give feedback on our new site, please send it along to feedback@globeandmail.com. If you want to write a letter to the editor, please forward to letters@globeandmail.com.
Comments